A bakery with a view 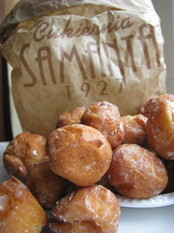 In the basemenent of Maciej Rzankowski’s bakery, Cukiernia Samanta, there’s a 100-year-old poppy-seed grinder that’s been in the family since 1927 – much like the business itself.  It started with his grandparents, in the southern Polish town of Zakopane, up in the Tatras mountains.  And it’s still there over 80 years later, and still going strong: Zakopane only has a population of about 26,000, but on the last Thursday before Lent (‘Fat Thursday’, the Polish equivalent of Mardi Gras) he sells 47,000 pączki doughnuts.

Since 1927 there have been many changes in Poland, much of which we found reflected in the history of Cukiernia Samanta. There’s a lot that his grandparents wouldn’t recognise: it’s changed from a one-shop operation into an out-of-town factory supplying cafés all over town.

But there’s a lot they would recognise, too. It’s still an avowedly local, family business, still has the same eye for quality, and the loyal customer base who wouldn’t let him get away with anything less. And having tasted a selection of delicious freshly baked goodies – both in one of the downtown cafés and after our tour of the factory – we’re sure his grandparents would have been proud of all of them. 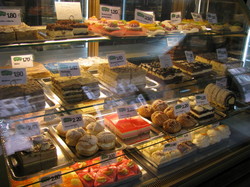 The Poles certainly like their cakes. During our two weeks of ‘research’ in Poland we managed to fit in a fair few of the usual suspects, including szarlotka – a particularly delicious apple cake, babka wielkanocna – an Easter loaf similar to a candied fruit bespeckled pannetone, sernik – cheesecake, a national favourite, sękacz – an unusual rolled cake resembling a many-ringed tree trunk, cooked over a fire, and kremówka wadowicka – the somewhat alcoholic creamy puff pastry sandwich famed to have been Polish superstar, Pope John Paul’s favourite treat. You’ll find these and many more in towns all over Poland (like these ones we found in Tarnów). In Zakopane we recommend you find them in Cukierna Samanta. 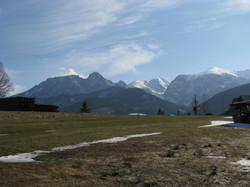 Maciej’s grandparents started with one café in Zakopane, baking on the premises, but now that things have grown, the baking is done in a separate factory. It’s kitted out with giant ovens, dough mixers and cake icing machines, and located outside town – but in a village with some of the best mountain views you’ll see. It employs 14 people, and up to 20 at peak times such as Easter. This way they can supply the three Cukierna Samanta coffee shops they now have, while also taking special orders and supplying various restaurants and other cafés.

The name’s changed, too. Back in the 1920s and ’30s they called it Mieszczańska – “town folk” or “bourgeoisie” – a suitably aspirational name with Poland newly re-emerging as an independent nation (after disappearing from the map for 123 years). Under communism, though, this didn’t go down quite so well – so they had to look around for something else. A regular customer and big fan of the American TV show “Bewitched” (like many other people at the time – it was one of the few foreign shows available in Poland) started calling it Samantha after the protagonist of the show and the magical nature of the cakes – and the nickname stuck. 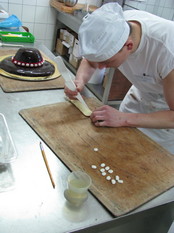 Poland’s entry into the EU has also brought about some changes for the bakery. Maciej can now acquire baking equipment and supplies from all over Europe far more easily and affordably than before. The availability of a range of semi-prepared ingredients like coloured marzipans, strawberry syrup and vanilla sugar now make it much easier for Cukiernia Samanta to offer a wide variety of cakes and confections. (Although finding good staff has become harder, as so many Poles have gone to find work abroad.)

There couldn’t be a bigger contrast to the 40-odd years under communism, when lack of ingredients was the major limiting factor on the business. Back then, in the days when people had to queue for hours for basics such as sugar and fruit, the bakery could only access very limited quantities of dairy products, and luxuries such as raisins or chocolate were unheard of. The bakery would often sell out within the first few hours and then have to close.

But many things have stayed the same. It’s still a family business: Maciej learnt the trade directly from his grandmother, who he used to help as a boy. And if needed, he could still jump in and take the place of any of his bakers, cake-makers or chocolatiers. The business passed from his grandmother to his mother and now to him. While his first two children have not shown much interest, he’s holding out some hope that the third will follow in his footsteps in the years to come. 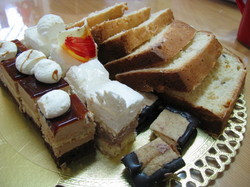 And it’s still dedicated to the local market in Zakopane. Maciej doesn’t have any strong desire to expand beyond this. People have certainly suggested it, and there’s probably scope for it, but he feels it would get harder to maintain their level of quality, and he doesn’t want to put out anything less than perfect. Besides, it’s hard enough work as it is (he’s often in with the morning shift at 4am, and works weekends) – why go overboard? As he says, it’s better to eat constantly with a teaspoon than go straight for the big scoop.

Cukiernia Samanta has a loyal local following of customers, who notice the slightest change in recipes. Once when he attempted to improve his rum and raisin ice cream, the immediate uproar had him change it right back again. These days, he says, his customers are increasingly adventurous and like to see exotic-sounding cakes in the display, like tiramisu. But not too exotic, he explains: if they can’t pronounce it, they won’t order it. (Although this mainly goes for women; men, of course, are too embarrassed to ask for anything more complicated than ‘cake’). 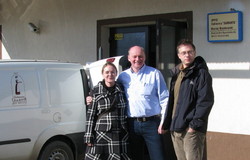 EU membership hasn’t made quite as big a difference as you might think. Despite the ease with which Maciej can now access supplies from all over Europe, he still sticks to local companies for key raw ingredients such as eggs and cream even when he could get them cheaper elsewhere, as he knows the producers personally and trusts them. The bakery always uses fresh ‘natural’ eggs – over 5,000 are cracked a day – never the kind from a packet or carton, favoured by large-scale low-quality bakeries.

The EU promised small Polish businesses funding to develop, but Maciej hasn’t seen any of it. The one bakery he knows who managed to find its way through the EU funding maze ended up returning its new EU-financed oven as the paperwork associated with it was more trouble than it was worth. Maciej spent 200 złoty on a CD-ROM explaining EU funding options, only to find he fell between all the categories. “Money is lying on the street but we can’t bend down to pick it up!” he jokes. 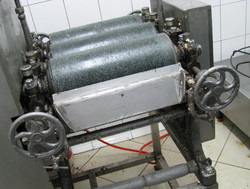 As everywhere, EU membership has seen some increase in health and safety regulations and inspections. But Maciej, who prides himself on running an extremely clean bakery, points out that these were mostly things they were doing already. The only thing that’s really changed is wi
th the ancient poppy seed grinder: the EU inspectors wouldn’t like the ease with which it could grind up the operator’s hands. He still uses it, of course – its heavy clanking stone rollers are far more effective than any modern machine for grinding poppy seeds into the sticky paste required by strucla makowa, the poppy seed rolls adored across Poland. He just hides it whenever the inspectors come around.