A bistro too far? 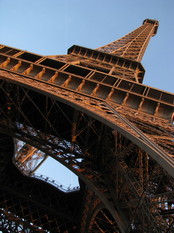 With only seven nights and seven days in Paris, narrowing down our shortlist of 36 restaurants to a feasible dining regime was no easy task.

In the end we managed six bistros, two fancy restaurants and over a dozen bars, cafes, boulangeries and patisseries, plus five outdoor food markets and two cooking classes, leaving a couple of hours to quickly nip up the Eiffel Tower and round the Louvre.

Did we go a bistro too far? 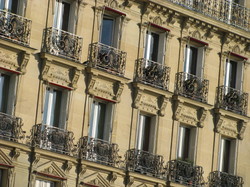 I’m not sure what makes a bistro a bistro, other than it being a smallish ‘neighbourhood’ restaurant; something like a London gastro-pub, without the pub.  Our two clear favourites were Le Repaire de Cartouche in the 11th arrondissement and Mon Vieil Ami on the Ile Saint Louis.

Cartouche was an armed robber and Parisian gang leader who managed to escape arrest for many years but was finally killed in a particularly gruesome manner.  The repaire  is his hideaway, although not so secret anymore:  we were turned away on our first attempt and ended up having to book several days in advance to get in to this small, unobtrusive bistro packed with chatty Parisians.

One run-off-his-feet waiter speed-walked up and down the room tending to everyone’s needs simultaneously, while his colleague hung out behind the bar, polishing glasses slowly.  The atmosphere in the cosy wood-panelled room was great and the food even better.  The highlights were our meaty main courses – juicy veal rump with a side of braised chard stems with liver, and roast young boar with chestnuts and mushrooms.  In line with apparent Parisian restaurant trend, our side dish of pureed Jerusalem artichokes came in a small cast iron cocotte, and was delicious.  Throughout our dinner the chef regularly appeared from the kitchen to have a glass of wine and a chat with the guests.  He claimed his duck paté en croute was simply duck, fat, salt and croute, but I swear I could taste some interesting spices in my enormous wedge. 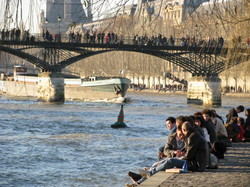 Mon Vieil Ami is also extremely popular, but maybe due to its central location attracts a more international (ie touristy) crowd.  Despite the British and American voices jarring in our ears, we enjoyed a fabulous French dinner and impeccable service from waiters whose English put our French to shame.  My soup was the winner of the meal – two sweet grilled prawns on a bed of chives and cress surrounded by a drizzle of piment d’Espelette sauce, with the creamiest Jerusalem artichoke soup theatrically poured over.  It was a sublime combination.  (See my recipe here.)  Piment d’Espelette  is France’s own AOC pepper, grown in the Basque country and tasting not dissimilar to Hungarian paprika.  It’s currently sprinkled all over Paris’ restaurant menus so must be very fashionable.  Coming in second was Matt’s chocolate tart, which was not only intensely chocolately, but also thin and classy, just like everyone in Paris (except us).  All other dishes were served in de rigueur cast iron cocottes, which suited their hearty natures.

We were slightly disappointed by our meals at Christian Constant’s Café Constant in the well-heeled 7th arrondissement and Alain Ducasse’s institution, Benoit, in the 4th.  It seems that big name chef owners do not guarantee full flavour satisfaction.

Café Constant had a great vibe – lots of people in a tiny space with Christian himself propping up the bar and joking with the customers – and also great starters – we loved our rich creamy langoustine bisque and salmon, scallop and oyster tartare – but the mains were under-seasoned and under-whelming.  I suppose if you go expecting Christian Constant’s food you’ll be disappointed, but if you go expecting it to be a regular café you’ll be impressed.

Benoit serves up plenty of classic Parisian bistro tradition, but nothing else that I would hurry back for.  The signature dish of smoked salmon with potato salad was quite nice but not worth the price tag, despite the use of the very fashionable ratte potato, which in this case tasted of nothing much.  My scallops were actually unfinishable, despite being scallops, due to their grayish moat of leeky ‘champagne’ sauce, muddied by an avalanche of utterly tasteless black truffle with the texture and appearance of gritty earth.  I have to admit, though, that the snails and the tarte Tatin were both fantastic.  (Although the madeleines at the end weren’t half as good as those we’d had in London recently at the St John.)

Also worth mentioning is l’AOC, which features AOC ingredients from around France in its menu.  Another trend was exhibited here – the smoked potato – this time fork-mashed with butter and crème fraiche into possibly the best potato dish we had in France (and we had a few).  Otherwise the restaurant specialises in its charcuterie assortment, complete with pots of crunchy cornichons, and rotisserie-grilled meats, including the tastiest juiciest tenderest sweetest pork belly I’ve ever had the pleasure of finding on my plate.  You may need to skip dessert here. 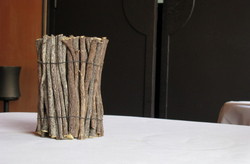 Gastronomic heights were reached at l’Arpège and Taillevent, both definitely ‘restaurants’ rather than anything more lowly.

Don’t be put off by the drab location, colour-scheme and fellow diners (senior civil servants, I’d guess) at Alain Passard’s refined establishment in the 7th.  L’Arpège will empty your bank account but also transform your appreciation of vegetables.  Never before have I had such a succession of exquisitely prepared dishes featuring vegetables as their main constituents.  Parsnips were pureed into a rich and sweet soup topped with cool whipped cream scented with speck.  Jerusalem artichokes were presented as liquid amber consommé, containing translucent ravioli of leeks, mustard greens and chives. 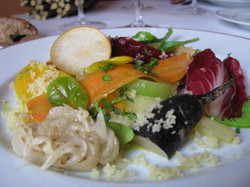 And the masterpiece – a beautiful plate of an array of perfectly cooked vegetables – purple carrot batons, black radish rounds, radicchio leaves, baby beetroot wedges and turnip disks plus much, much more – served Moroccan style with couscous, cuminy caramelised onions, plumped up white raisins, and delicate harissa- and charmoula-inspired sauces.  This deconstructed vegetable tagine was drizzled with argan oil from Morocco, another trendy ingredient we found cropping up in the city.  Start saving up for l’Arpège now.

Taillevent  is one of those incredibly classy institutions where the waiters outnumber the diners by at least 2:1.  Despite purposefully ordering a menu with ‘only’ five courses, we found ourselves battling through nine and wondering if we had lost all perspective on the world.  But they were delicious, especially the crab remoulade  (sweet, fresh and fragrant, and featuring our friend the piment d’espelette), the farro risotto, farrotto if you will, with frogs legs (possibly the butteriest member of the risotto family I have ever had, which is saying something) and the cheese course – a quenelle of creamy, salty Roquefort paired with an alcoholic prune on a lake of reduced Banyuls sauce.  By which point I had reached Stage 3 of Head Rubbing and so cannot comment with any accuracy on the following three courses. 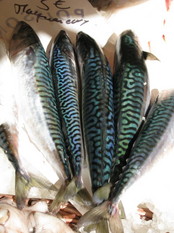 If you find yourself dining in Paris, here are my tips:

1) Book ahead by a couple of days, even for small neighbourhood bistros, as if they’re good, they’ll be full.  Swanky restaurants naturally need even more prior planning.

2) Don’t be too boring – opt for the venison, boar or duck instead of the beef, pork or chicken, and slip in as much offal as possible.  Paris seems to specialise in game and ‘variety meats’ (as the Americans euphemistically call innards).

3) Beware of classic custard-based desserts on bistro menus, such as crème brulee, crème caramel and pots de crème.  Ours always tasted a bit watery, not at all creamy and with a distinctly artificial vanilla overtone.  We later learned from a chef that restaurants sadly all too often buy in a packet custard mix (complete with fake black vanilla seed specks) rather than make their own.  Shocking. 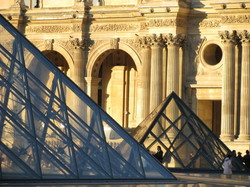 4) Skip breakfast and/or lunch and plan yourself a strict walking regime during the day to build up the appetite you’ll need to get through the mountains of meat and starch you’ll be presented with at night.  The Seine embankment, Eiffel Tower steps and Louvre corridors all work quite well.