A Pole apart? Thinking outside the goat-shed 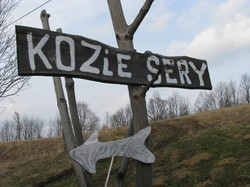 Luckily, by the time we’d reached the remote Bieszczady Mountains we’d learnt enough Polish to recognize that ‘kozie sery’ meant ‘goat’s cheeses’.  (It’s great being married to a linguist.)  So when the hand-painted wooden sign appeared by the side of the road we slammed on the brakes – and then tentatively approached the farm gate, while two enormous barking dogs approached us from the other side, a lot less tentatively.

The farmer came to our rescue, and proceeded to introduce us to his goats and cheeses with great generosity of spirit.  You’d be forgiven for thinking that in this far-flung corner of southeastern Poland he was making cheese the way his great-grandfather had, according to time-honoured Polish tradition, isolated from the world.  But you’d be wrong (as we were).  In fact, Zbigniew Wantula’s cheeses have truly international dimensions, but with traditional cores. We were to discover how Germany, France, Greece and the UK were all playing their part…

But first we were to learn a few goat herd basics.  Have you ever wondered how many goats one man can look after?  Or how many goats it takes to produce enough cheese to sustain one man’s livelihood?  Well, the answer is 24.  (Actually, 25 – one was born while we were there, which didn’t surprise Zbigniew as he expects baby goats to arrive on or near 8th March each year.) 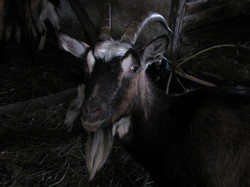 These ones are various shades and stripes of black, grey, brown and white, and look more like impala with their pointy horns and doey eyes.  There are two males.  One, the alpha ram ‘chef’, leads the goats through the mountain pastures and back to the barn when called by Zbigniew.  He is huge, with scary-looking curly horns long enough to do you some damage from a distance.  The other provides the sperm.  “It’s a good thing the chef is castrated,” explained Zbigniew, “or this place would really stink.”

First of the international factors was Germany.  Zbigniew worked there for many years to earn good currency, as a kitchen hand, assistant brick-layer and snowplough driver.  This money allowed him to move out of the city and into the beautiful Polish countryside to build his farm.  He’s been raising goats here for 10 years.  He had no prior experience, but liked the idea and much prefers the tranquility of the Bieszczady Mountains to city life. 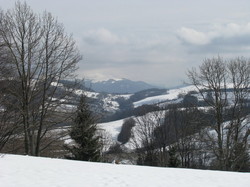 So now he makes cheese every day, the same way most cheese is made:  The milk is heated to around 40 degrees Centigrade, rennet is added which causes curds to form, these are cut, and then scooped into moulds, which are turned over several times while they release their whey, and salt is sprinkled on top. Sadly for us the cheese was not at its best as the goats were still living in the barn.  Come summer (which Zbigniew says is coming earlier every year round here), they will be roaming the hillsides, eating lots of lovely grasses, herbs and flowers and producing much more milk (up to 40 litres in total per day) of a much richer flavour.

The second international influence is France:  While Zbigniew thinks Polish herbs are good, he thinks herbes de Provence are better.  Lucky for him a friend travels there regularly and each time brings him back a large bundle of rosemary, marjoram, basil, bay, thyme and the like.  Zbigniew uses these to flavour some of his fresh goats’ cheeses.  The one we bought, still warm and weeping from having been made that morning, needed some more salting and aging but was already delicious, and quite unlike any other cheese we’d had in Poland. 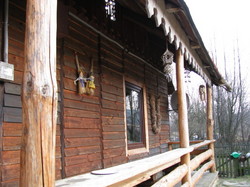 And then there was Greece:  A friend of Greek heritage in a village up the road taught Zbigniew how to make Greek feta-style cheese.  So now some of the fresh goats’ cheeses are aged in a salted whey for several months.  The result is a harder, tangier cheese not dissimilar to Greek feta and quite delicious.  One of these promptly joined the fresh herbed cheese in the shopping bag.

And finally the UK joins the picture, or maybe…  One of Zbigniew’s sons is currently in England, seeking work, although unsuccessfully so far.  Zbigniew hinted that one day, if his quest does not bear fruit, or perhaps once he’s made his fortune, his son will join him on the farm and together they will build a second barn and, as you may have calculated, manage a flock of some 50 goats.  In which case, we imagine, Zbigniew’s international cheeses may last another generation and become part of the Bieszczady cheese-making tradition. 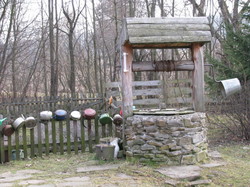 The demand for his cheeses is certainly there – his buyers at the pub up the road, in a little cheese shop in Kraków and further afield by mail-order want more than he can supply. But most of Zbigniew’s international cheeses are sold on his doorstep to regular locals from the village.  As we were leaving, the local bus pulled in and the driver popped in for a chat and some cheese.  We only hope the little old lady left waiting in the bus was his wife and not a long-suffering passenger.