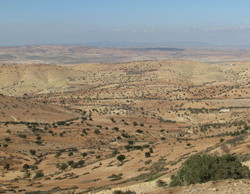 Argan oil is only produced in Morocco, the only country in which the ancient argan tree grows.

The region from Essaouira to Agadir and inland, particularly the Souss Valley, is full of scrawny, wild, drought resistant argan trees.

Families have collected, cracked and ground argan nuts for their own homemade oil for centuries.

Now, increasingly, there are women’s cooperatives for argan oil production, as we found while exploring the region last October.  This is largely a very good thing, giving poor communities a source of income and women a degree of independence, whilst also helping protect the natural environment.  But the tourist should beware of some fake ‘coopératives féminines d’huile d’argan’, which are neither cooperative nor run by women nor selling pure argan oil, when you look behind the screens.

We found an excellent cooperative called Tamounte, in Imin’Tlit, where we learnt all about the process and even had a go.  It is a long and intensive process.  35kg of fruits, harvested in the summer, are needed to make just 1 litre of oil.  To turn them into oil they must be dried, depulped, cracked open to find the kernels, which are then toasted (for the darker nuttier version), ground to a paste and pressed to release the oil, which is finally filtered.  Residues and side products are used in soap-making and for animal feed.  Machines have replaced women’s hands for some stages of the process, but the tricky nut-cracking step is still done by hand, nut-by-nut-by-nut.

All this labour, plus the fact that the price of unprocessed argan fruits has recently risen to nearly 5 dirhams (40p) a kilogram due to drought, explains why argan oil is not cheap.  You might think that £15 or more for half a litre or less is extortionate, but if you do the maths you realise it isn’t. 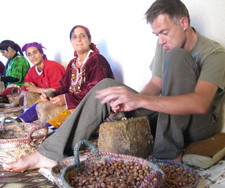 For the women earning a small income here, this is often their third job.  The ‘travail triple’, as it is called, also includes all the domestic chores for the household and much of the agricultural labour in the family’s fields.  For cracking argan nuts, they can earn cash for themselves (their menfolk will be controlling the income from any vegetables sold at market), although only 35 dirhams (£2.77) per kilogram of kernels produced.  In a day, a fast nut-cracker can probably produce 1¼ kg of kernels, which isn’t even enough for 1 litre of oil!

So I’d say it’s worth the price tag.  Argan oil has a unique and interesting flavour, and you don’t need much to transform a dish.  It’s at its best used cold or slightly warmed, drizzled over salads, couscous dishes, eggs and tagines.  The flavour and colour depend on how the nuts were processed and if the kernels were toasted, ranging from very light to deep orange with a warm, toasty, nutty and occasionally animally flavour.  You can fry with it, but much flavour will be lost.

One delicious way to use it is in a paste or dip made with ground almonds and honey.  In Morocco this is ‘amlou’; we had the most delicious version of all at the Tamounte cooperative, with freshly baked Moroccan bread and, of course, little glasses of mint tea.

One final note… there is a story that argan oil production involves goats, and, er, their poo.  It is said that the goats climb the trees, eat the fruits, then return to their owners where they

do their business and the prospective oil makers pick out the nuts, handily not only picked and transported for them, but also depulped.  We were delighted to find that this story is entirely true except that the goats actually regurgitate (ie sick up) the nuts, rather than passing them out the other end.  So that’s OK then.  This accounts for the distinct animal note you get in some argan oils.  You may be reassured to know that a professional cooperative like Tamounte does not use these fruits; theirs have never seen the insides of a goat.  But the practice is still common in small-scale family production.

Buying argan oil
It is possible to buy argan oil in the UK, including online from a number of suppliers, such as The Argan Company, who sell both the cosmetic use and culinary use versions.