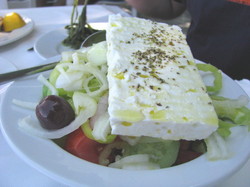 Did you know that 2008 is the official year of Feta cheese?

Neither did we, until we read it in the in-flight magazine on our way from Thessaloniki to Crete for a conference on ‘the Eastern Mediterranean diet’.  This strengthened our resolve to find a Feta-maker and learn all about this crumbly white cheese, which most of us know from its prominent role in the ubiquitous ‘Greek salad’.  And why is it getting its own special year this year?

A couple of weeks later we struck gold in Olympia, a small modern town in the Peloponnese which has sprung up next to the ancient city of Olympia (birthplace of the Olympic Games no less) to sell fake ancient Greek statuettes and the like to the swarms of tourists who descend on the actually rather fantastic archaeological site.  Our hosts, Susanna and Theodore Spiliopoulos at Hotel Pelops, not only taught us lots about Greek cooking but also kindly arranged for us to visit a small, traditional Feta dairy a few miles out of town.

The George Bournas dairy is one small building set all by itself among the gently undulating fields of vegetables, pasture and olive groves which cover this part of the Peloponnese.  Inside we were greeted by the unmistakable milky smell of cheese-making and found Andonis Nikolopoulos hard at work making the day’s batch of Feta together with one other colleague. 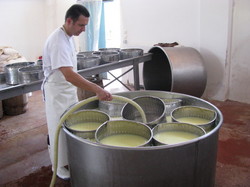 Between the stages – forming and cutting the curds, draining the whey, filling the moulds etc – he found time to tell us all about the cheese and show us around.  Despite our incessant nit-picky questioning (“what temperature is that exactly?”, “how long do you leave that there?” “why do you do that?” etc etc), Andonis remained patient and good humoured throughout, and helped us understand why Feta is a very special cheese…

It is particularly special right now of course, it being the Year of Feta and all.  This is because Feta attained protected status within the EU a few years ago, which means you can’t sell something called ‘Feta’ unless a) it was made in certain parts of Greece, and b) it was made in the traditional way using pure natural ingredients, as now set out in law.

The results of this are a) I feel I should now be giving (the real) Feta a capital ‘F’, and b) more importantly perhaps, all sorts of former ‘feta’ producers are now out of business or having to call their white cheese something else, like, er, ‘white cheese’ (as they’ve always called it in Turkey).  A great many of these are in Greece itself of course, but feta has been big business elsewhere.  In 2006 Dutch, Bulgarian, Romanian and Danish companies controlled 50% of the billion-dollar feta industry.  (You can thank the in-flight magazine for that gem of a fact.)  So you can imagine that it was no easy task for Greece to win the PDO (‘protected designation of origin’) status for its own, beloved Feta.

So now when you buy Feta you’re guaranteed to be getting at least 70% sheep’s milk in your cheese, with the rest being goat’s, and certainly not cow’s.  And there’ll be no nasty additives or powdered dairy products of any kind, as there were in the bad old days when anybody could make ‘feta’ and put anything in it.

But there are other reasons Feta is special.  It’s the first cheese we’ve come across which is matured in barrels, and it seems something very special goes on while the cheese is sitting in its own juice in sealed wooden barrels.  Without this unusual stage it simply wouldn’t look, feel or taste like proper Feta, which should be soft, firm, crumbly, tangy, salty, sour and creamy all at once.  Not all Feta gets this old fashioned barrel maturing in its own whey, so Andonis’ Feta is paticularly special.

But we should begin at the beginning:  To make Feta, this is the process Andonis starts every day between January and June (and less frequently the rest of the year when there’s less milk):

Heat your raw, live sheep’s & goat’s milk, add rennet and yoghurt, cut the curds that form, remove the whey, put the curd in moulds and add salt.  Wait a bit, put it in barrels and seal it up tightly.  Leave it to ferment for a few weeks, check for explosions, store in a cold place for three months until it’s safe to eat.  Phew.

(Actually, it’s much more complicated than this.  Read to the bottom, or click here if you just can’t wait).

You’d think from all this that Andonis must be a wisened old village man steeped in traditional expertise from decades of Feta-making practice.  Not so.  Andonis comes from Athens, where he worked in a paper bag printing factory for many years.  Three years ago, when the number of his offspring went up another notch and money became tighter, Andonis and family moved out here where his father-in-law (ie George Bournas himself) runs this small dairy, to become the third generation in the family business.  He much prefers his new rural, cheesy life; “Athens is full of madness,” he warned us.  He’s learnt everything he knows about cheese-making on the job.  Perhaps I too could be a cheese-maker one day…

And it’s not just Feta on which Andonis is now an expert, as the dairy also makes two kinds of delicious yoghurt (regular and strained, which is for making tzatziki), golden sheep’s butter (which goes to the best pastry shop in town for use in baklava, as we also saw in Turkey) and mizithra.

Mizithra is known in the trade as ‘gold’, as it’s money for nothing – cheese made from leftovers.  All that whey left over from the Feta-making this morning, along with the skimmed milk and buttermilk left over from the butter-making, will be heated up again, coagulated with more rennet and formed into 20 balls of hard sheepy cheese for grating over pasta which he can sell for €150.  The only catch is he has to age it for a year first.  There’s no waste in this dairy – everything gets used.  Any whey he can’t use up this way goes to local farmers to feed their animals. 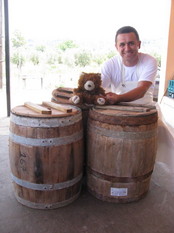 Andonis left us with a couple of Feta-buying tips:  Firstly, get the real stuff straight from the barrel, made from natural products (not powdered milk and the like) and sold in big cubes, not the pathetic flat squares sold in plastic packaging, which is more expensive and less tasty.  It went without saying it should be Greek.  Secondly, get Feta made in March or April (therefore first ready for sale from around June-July) as this is when
the sheep had the best stuff to eat in the fields – all the new, sweet spring herbs, grasses and flowers.

Back at Hotel Pelops, Susanna added to this her Feta-eating tip:  Try it with some yoghurt on ‘savor’, a delicious dish of fried aubergine and rich tomato sauce which Suzanna showed us how to make (recipe here soon).  The combination of the sweet, savoury aubergine dish with the tangy Feta and creamy yoghurt was absolutely fantastic.  I think we’ll be making this every summer from now on.

It’s 2008 – Year of Feta!  If there was ever a time to develop a Feta fetish, this is it.  Go and buy some real Greek barrelled Feta with a capital F!

Fetafication: what Andonis actually does: 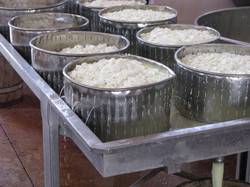 Still not bored?  Read about our dairy adventures in France, Poland, Romania, Turkey and Italy!