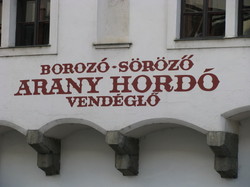 The Hungarian language is fascinating, and nowhere is this better reflected (for me at least) than in the words for ‘bar’: a borozó is a wine bar, and a söröző is a beer bar.

At first sight, perhaps, you might not agree that these words are particularly fascinating.

But you’d be wrong. And here’s why.