This is such a great dish – you must try it!  In Morocco we probably had it at least five times.  My first tagine instructor was the lovely Fatna, who helps our friend Maggie in Tangiers.  Fatna likes to keep the olives separate and use them as a garnish, having cooked them with minced garlic, preserved lemon, parsley and coriander (cilantro).  I have simplified; one of the wonderful things about most tagines is that you can put everything in together at the start and then leave it to work its magic largely undisturbed.  It couldn’t be easier. 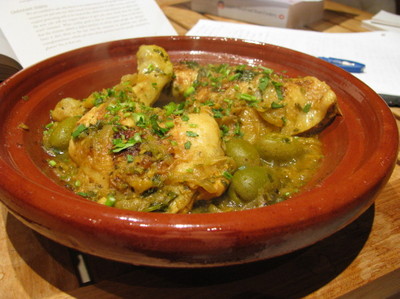 ‘Tagine’ refers to both the dish as well as the cooking vessel, in which it is also served.  In Morocco you often see lines of earthenware tagines outside restaurants, each sitting on its own little charcoal brazier and decorated with a tomato perched on top to catch the eye.

But in many homes today people now use stainless steel pressure cookers – they take half the time or less to cook and don’t break.  Our best purchases in Morocco were several simple cooking tagines.  Having seasoned them (a long process involving soaking, rubbing with garlic, boiling and baking) they now work a treat on the gas hob.  There’s no need for a separate serving dish, or even plates and cutlery, so ideal if you hate washing up, as I do.

In Morocco one would use a whole chicken.  You would go to the market, choose a bird you like the look of and then get the vendor to cut its throat, dunk it in boiling water and then stick it in a mechanised plucking machine for a few seconds before hacking it into several pieces.  The whole process takes a couple of minutes and you walk off with the butchered chicken in a plastic bag, muscles still twitching.  In some markets you get the choice of ‘romi’ or ‘beldi’ chickens, ie ‘modern’ or ‘traditional’, the former being factory farmed and the latter free-range from family farms in the country.  This section of the market has a particular smell that makes me want to gag.  You might think this all sounds disgusting and be thanking your lucky stars you can get a sanitised plastic-wrapped packet from Sainsbury’s.  But the Moroccan way seems much more honest, transparent and healthy to me the more I think about it.

Anyway, I suggest legs here as they respond better to slow cooking.  I’ve also slightly upped the spicing.  Moroccan tagines are surprisingly lightly spiced, and I prefer a tad more oomph.  The preserved lemon is what really makes this dish.  I have yet to find a store-bought brand that tastes anywhere near as good as those in Morocco and those I can make myself in 10 minutes.  So I strongly suggest you make your own.  They’re also delicious chopped up into salads and salsas.  But if you don’t have any ready, just use a whole diced lemon.

Contrary to what I had assumed, tagines are not eaten with couscous in Morocco.  Couscous would be a separate course or event in itself.  With tagine you eat bread, torn into hunks and used to scoop up the meat and mop up the exquisite sauce.