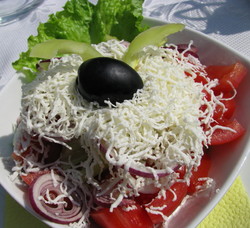 We definitely haven’t done Bulgaria justice – we only ended up staying here for two days.  But we’ve had a fantastic time.  We’ve seen the sun and the sea for what feels like the first time in months; eaten lots of fish and lots of yoghurt; and discovered the cultural importance of salad and its vital supporting role in the consumption of cigarettes and alcohol.

Our first stop was Nesebar, yet another UNESCO-protected site (they seem to be buying up prime sites everywhere in Eastern Europe – surely it is no coincidence that their name rhymes with Tesco? We suspect some sort of conspiracy).  It’s a beautiful little peninsula full of old Byzantine stone churches, blue (Black) sea, fish and – most importantly – salad.  This last factor might not sound very exciting to you, but after a month or so living off preserved pork fat, it seemed pretty revelatory to us.  So at first, we were happy just to eat it, assuming in our innocence that it was simply a foodstuff like any other.  Only when we moved on to the village of Kosti did we find out what it’s really for …

Almost as soon as we’d crossed the border from Romania, we realized we’d really moved from Eastern to Southern Europe.  Suddenly the landscape and architecture looked almost Mediterranean, the sun came out, our gloves and hats came off and our sunglasses went on (I realize we were driving down the coast, and most of Bulgaria is entirely different – and that the change in temperature probably had as much to do with the fact that it was now April – but indulge me here).

And Nesebar confirmed all of this.  We spent our time wandering round the town, admiring the fishing boats and generally enjoying being able to spend time outside without freezing.  And feeling smug that we weren’t in Sunny Beach just across the water, in one of the huge package tourist complexes we could see (and that seem to line much of Bulgaria’s Black Sea coast).

Towns are all very well: but in Romania we’d found that visiting villages was really the way to find out about how people live and what they eat and drink, so we thought we’d try to do that here too.  In Romania, this had been quite easy what with Anna speaking Romanian – but here we could barely read the road signs.  However, close study of our guide book yielded the phone number of Jordan in Tsarevo who (apparently) might be able to arrange a stay in a village somewhere in the far south-east corner, which was handily on our route through to Istanbul.

So we phoned Jordan; he phoned around to find someone who might put us up; and Alexander and Tanya in Kosti kindly agreed to be our hosts.  In fact, they even went so far as to invite their English-speaking friend Maria over for dinner to help interpret and make us feel even more at home.  Of course, their judgement may have been clouded by the fact that they had (as quickly became apparent when we turned up to meet them outside the village bar) spent all day getting battered.

Kosti is a picturesque village set in rolling hills near a national park in the Strandja mountains.  It’s actually quite a famous village in Bulgaria, in particular for its annual religious festival featuring bare-footed dancing on burning coals, something that has now spread to Greek Macedonia since many former Greek residents have left Bulgaria.  And Alexander is one of its more famous residents, having been a mainstay of the national water-polo team for some time, both as player and coach.  He is now spending his time writing his memoirs, with the aid of liberal doses of the local grape spirit rakiya.  As we found out, this also means eating a lot of salad.

Salad is, as he explained, “very important for Bulgarians” (the national dish shopska is a salad, even if it was only invented in the 70s).  So it made sense that on sitting down, the first thing we were presented with was a big plateful.  It made less sense to begin with that the first thing that everyone else in the room did was not actually eat the salad, but light up their cigarettes; with the second thing being to get into the rakiya.  But soon enough we started to piece this all together.  The salad’s not just there to eat – it’s essentially a culturally-licensed lubricant to enable the eater to drink more rakiya while smoking more cigarettes than would otherwise be possible.

And judging by the state of most of the village men we saw leaving the bar, it’s pretty damn effective.

Anyway, we were made to feel very welcome, had a lovely evening and all got on famously.  The next day saw us pushing through our hangovers and our sore throats (thanks, or not, to the traditional Bulgarian breakfast of coffee and cigarettes) to drive over the hills into Turkey.  Whether more salad-based culture awaits us there, only time will tell.

You can see some of our photos from Bulgaria here.