Corn’s domestication of the human race 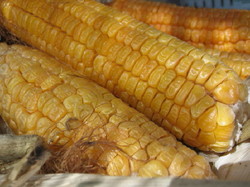 Zea mays, the giant tropical grass commonly known as corn or maize, now totally dominates both American agriculture and the American diet.  93.6 million acres of US soil is given over to its production (imagine a cornfield bigger than Germany), and of the 45,000 or so different products in the average American supermarket, over one quarter contain corn.  Why has corn been so successful in domesticating us?  The answer involves sex, drugs and very complicated US government farm policy…

Firstly, Zea mays has contributed to her own success by being able to use more carbon than almost all other plants in every instance of photosynthesis.  This means corn is unusually efficient at turning air, water and sunlight into calories, which makes it an attractive crop to grow.  What’s more, she’s particularly gifted at adapting to all kinds of climates, and rewards her cultivator with a choice of a ready-to-eat vegetable meal or a storable grain, with additional fibre on offer for fuel or animal feed.

Secondly, the sex bit:  Corn sex is a bizarre affair, unlike anything else in the plant world.  The tassel at the top of the plant contains the male organs.  The female organs are several feet below – they are the hundreds of little flowers forming rows along the tightly sheathed cob.  The silky threads protruding from a corn cob are in fact the flowers’ styles.  They magically emerge on the very day the tassel releases its pollen, ready to catch a grain on its way down.  When a grain of pollen senses it has made a good landing, it splits into a pair of twins, who follow each other all the way down the inside of the silk to the flower, where one fuses with the egg to later form the germ of the kernel, while its twin starts forming the starchy part of the kernel.  Aside from giving biologists hot flushes, this bizarre procedure also makes corn sex particularly suited to human intervention.  That is to say, it’s easy to cross plants with one another and create all kinds of corn that are good for different habitats and uses.

Thirdly and most importantly, corn has benefited from a series of US agricultural policies over the last century.  In a nutshell, these have been designed to make and keep corn artificially cheap, which made American food cheaper for the consumer.  Basically, farmers are being paid to grow corn.  But the real beneficiaries are several enormous companies (one of which, Cargill, is the biggest privately held corporation in the world), who are provided with a source of dirt cheap low quality corn, with which to make the ‘ingredients’ for everything from Chicken McNuggets and Coca-Cola to cosmetics and adhesives, and plenty of profit.

And finally, the drugs:  With more and more corn being grown on the same land, draining it of nutrients since the days of rotation are long gone, yields would have declined were it not for the invention of chemical fertiliser.  This came about simply because after WW2 the US government had a surplus of ammonium nitrate, the principal ingredient in explosives.  Hybrid corn now consumes more fertiliser than any other crop.  To make chemical fertiliser you need huge amounts of fossil fuels.  In the good old days, when sunlight and nitrogen-fixing bacteria in the soil did the trick, a farm could produce more than two calories of food from every one calorie of energy invested.  Nowadays it takes more than a calorie of fossil fuel energy to produce a calorie of food from corn.  But farmers still grow it because they’re paid to.

So, these things help explain why corn gets everywhere.  Check out the ingredients list of a few items lurking in your cupboard or fridge.  If you see citric acid, lactic acid, glucose, fructose, maltodextrin, ethanol, sorbitol, mannitol, xanthum gum, (un)modified starch or MSG, to name but a few, the chances are it contains highly processed corn (especially in the US).

Does this matter?  Yes, because before those millions of acres of land were given over to corn, they contained trees, hedgerows, multiple different crops and a diverse animal population, which was more healthy for the planet in a million different ways.  And because the millions of tonnes of chemical fertiliser poured over the corn, far more than the corn can even use, are ruining countless streams, rivers, lakes and bays.

And because the millions of tonnes of corn that has ended up on our plate, via food additives and corn-fed beef, are ruining us – not least because they’ve allowed the mass production of artificially-cheap, overly-sweet, non-nutritious junk foods and drinks, for which, it appears, many of us are suckers.  (The average American consumes 66 lbs of high fructose corn syrup a year.)

And because all this cheap American corn, and its derivatives, are pricing thousands of small-scale farmers around the world out of the market.

And because the whole industrial food system now requires an unprecedented quantity of fossil fuels to function.

And because the crafts of growing and preparing real foods are declining, and if we’re not careful will become entirely lost skills which our grandchildren may read about in their history books with bemusement.

So, I think it matters.