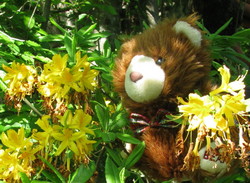 Being an avid amateur classicist, as well as a honey-loving bear prone to the odd spot of light substance abuse, one of Barnaby’s favourite stories is the episode from Xenophon’s Anabasis in which thousands of retreating Greek soldiers are rendered helpless by the narcotic effects of the local honey.

Imagine his excitement on arriving in the Kaçkar mountains in north-eastern Turkey and being told by the local Hemşin people that it all happened right here!

Show me the honey, he thought.

Sadly it turned out to be the wrong time of year for honey.  Or perhaps not so sadly – it turns out that the honey in question is known as deli balı or “crazy honey”, and is made from a particular species of rhododendron long known for its strange and potentially dangerous effects.

So Barnaby had to make do with admiring (and sniffing) the flowers.  But he did sleep very well last night.