Doing a twirl in the harem 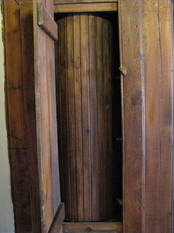 Today Barnaby explored an old Ottoman mansion in Safranbolu.  He was very interested in the strict divide between the public selamlık and private haremlik sides of the house.

He learnt that this was due to the culture of women having to stay at home and out of sight of men outside their family (which he has noticed still persists today in some particularly conservative parts of Turkey).

This meant that when male visitors came to the house, they were entertained by the family’s menfolk in the public selamlık, while the womenfolk stayed hidden behind closed doors in the domestic haremlik.

However, this system had one potentially disastrous flaw:  Turkish men not generally being renowned for their domestic flair in the kitchen department, all the cooking happened on the harem side of the house, leaving the men and their guests in danger of growing hungry.  How could the food cross the border without people seeing each other?

The ingenious solution was this rotating cupboard.  Food was placed inside from the harem side, spun round and collected by the men on the other side, without the women having to expose an inch of themselves to the guests.

Curious as to which side he would feel most comfortable on, Barnaby spent the day spinning between them both.  Click here (or the picture) to open the cupboard and watch him twirl.