From gnocchi to njoki 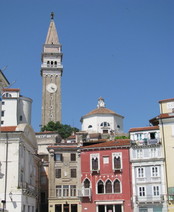 We sped over the border from Italy heading straight for the Istrian peninsula, and the small village of Sveti Petar u Šumi – we’d booked ourselves into an agritourism-style place we’d found on the internet, where they said they could teach us all about the local cuisine.  Sadly, this meant completely ignoring Slovenia (well, we stopped for lunch) – we’ll have to go back.  On the up-side, it meant more time in Istria, supposedly the gastronomic centre of this side of the Adriatic.

We didn’t quite know what to expect from Istria (or Croatia in general in fact).  We knew there’d been a lot of Italian influence in the past (and the architecture on the Slovenian coast certainly looked like Venice to us) – but was this still true?  And looking at the map, we also weren’t far from where we’d been in Hungary all those months back.  Or would it remind us of Slavic Bulgaria?  Or even Turkey – the Ottomans got this far at one stage.  We were keen to find out …

And we couldn’t have chosen a better place: the guesthouse we’d found turned out to be run by the lovely Srblin family – four generations of them – and we immediately found ourselves in the kitchen with Nevia learning all about bread.  And pasta.  And ham-curing.  And sausages, and herb liqueurs, and lots lots more.  They’re the kind of family who make everything themselves – there’s ham hanging from the kitchen beams, and their travarica (the herb grappa) has won competitions.  We had a wonderful few days -tearing ourselves away from the kitchen occasionally to go walking in the hills, or swimming off the nearby coast, but mostly cooking and chatting.

And all those international influences started to appear immediately.  The first thing we noticed was the Italian influence: the cured ham may be called pršut rather than prosciutto, but it’s essentially the same thing; similarly gnocchi may be called njoki, but you’d still recognise them in a dark alley.  There were Turkish influences: leaf rolls are called sarma here too.  Pies (burek) are just as popular here as in Greece.

From there we explored Istria a bit, trying truffle ice cream in Buzet, and getting lost in Sveti Donat and being rescued by a 78-year-old winemaker who gave us a taste of his wine, showed us his pršut, and explained his life philosophy in some kind of Italian (I think).  Then spent a rather less memorable night in a plush and extremely expensive hotel – very nice and all, but not a patch on the Srblins.  Just goes to show, the people you meet count for so much more than the fixtures and fittings.

After that we went to the island of Cres, where we thought we’d have a quick stop at the Tramontana pension in the hilltop village of Beli – most people come here for the diving, and we fancied a swim.  But we ended up staying for longer – again, mostly because of the people (although I must admit the swimming was excellent too).  Nina and her son Antonio fed us with delicious fresh squid, and kept us in honey liqueur and more travarica.  They even introduced us to the local international finger-fishing champion, who’d just landed some enormous dentex dentex – then Nino the chef let Anna join him in the kitchen while he prepared them, and let me sit outside and eat them. Yum.

From there things were a bit of a blur: Trogir was nice as towns go (essentially an island made entirely of marble, and surrounded by unbelievably expensive yachts), and it did have a very good market where grannies come to sell their little bottles of olive oil, the ubiquitous travarica, and even the carob version rogačica.  But the famous local speciality pasticada was really a bit disappointing.

Split was beautiful too – there’s not many towns where you can live right in a Roman emperor’s palace (and even stay in its vestibule).  And the little wild strawberries at the market were tasty.  But after those lovely villages, towns just weren’t quite doing it for us.  And much as we’d enjoyed our short stay here, it was time for the ferry back to Italy.

You can see some of our photos from Croatia here.