From the people who brought you yoghurt 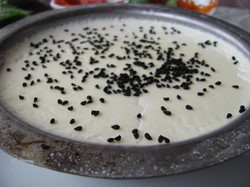 You might not associate Turkey with dairy products in the way that you might France or Italy.  But dairy is big business in Turkey, the country which invented yoghurt and exported it to the world.  There are also numerous cheeses and some very special butters and creams, and an ice cream you eat with a knife and fork. 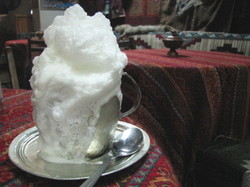 Most apparent is the yoghurt, which is found in all manner of preparations just as it must have been 15 centuries years ago when the nomadic Turkic tribes migrated into Anatolia from the east carrying their bags of preserved, fermented milk in the form of yoghurt.  We found Turkish yoghurt to be delicious – properly tangy like yoghurt should be, and also rich and luscious, especially when strained so as to remove excess liquid.

So we didn’t mind getting it for breakfast, lunch and dinner, including dessert and even in our drinks.  Ayran is a particularly refreshing yoghurty draught, perfect for a hot afternoon.  To make, mix chilled yoghurt, cold water and a little salt in a blender or food processor and serve complete with frothy head. 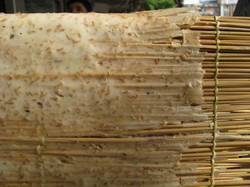 Yoghurt is also preserved by mixing it with wheat and then drying it.  Forget Knorr, tarhana is the original packet instant soup.  To use, simply simmer a spoonful with some water and, hey presto, your cuppa soup’s on the table.  This ancient nomad practice, born out of necessity, still survives well today.  We saw it on sale in several markets and met several women who make their own big batch annually.

On asking how tarhana is made we got as many different answers as women we asked, each speaking with great authority on the matter.  Some people cook theirs for hours before drying, others only briefly.  Some add herbs, tomatoes, onions and all sorts of tasty flavourings, while others insist it should be plain.  Some say it should be fermented (for two weeks, on a warm balcony) while others say that’s rubbish.  Some make flat, wafer thin sheets of the stuff, others crumble it into powder, while yet others insist it should be formed into dented balls. 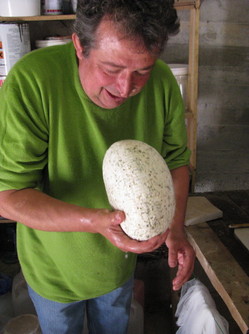 Then there are the cow’s, sheep’s and goat’s milk cheeses, fresh and aged, crumbly and stringy, plain and flavoured.  Essential for the Turkish breakfast plate are some slices of the ubiquitous slightly crumbly, tangy and moist feta-like ‘white cheese’ (beyaz peynir).  (Cheese-naming in Turkey isn’t quite what it is in France and Italy.)  I was envious of Erhan Şeker, who is building up his own goat herd from which to experiment making all sorts of fresh, brined and matured cheeses.  I’m hoping Matt could be persuaded of the idea, especially after tasting Erhan’s delicious ricotta-style cheese…

But the dairy product we looked out for on every menu we perused was kaymak, which is a form of clotted cream, complete with crystalline crust, traditionally made with water buffalo milk and so thick you could almost eat it with a knife and fork. 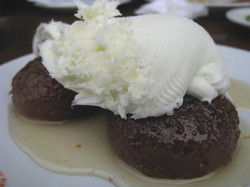 Kaymak is made by very gently simmering lots of pans of milk for a very long time, then skimming the fatty cream off the surface of each pan and layering these in a container in which you will then let the cream mature for a little while.  Needless to say, we liked it.  A lot.  It is has the most incredible mouth-feel, is barely sweet – indeed fractionally sour, full of animal dairy goodness, and is a beautiful, innocent-looking near-white in colour.   Served on top of one or other sticky syrup-soaked cakelet or with syrupy roast quinces it is enough to make you pass out. 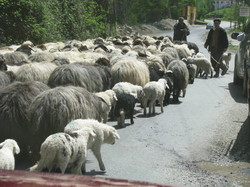 Sadly buffalo aren’t as commonly bred in Turkey as maybe they once were, so your kaymak is more likely to be of the cow variety, which is slightly less interesting but still very good.  Or, if you’re in the southeast, where it’s too hot and dry for cows and the fields (and roads) are full of flocks of sheep, all your dairy products will be sheepy, very sheepy.  This includes the clarified sheep’s butter and starch-thickened sheep’s kaymak which go, in generous helpings, into the baklava of Gaziantep, giving them that slightly sheepy flavour which lets you know you’re eating the real deal. 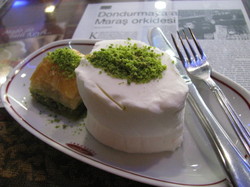 The goats of the southeast contribute their bit too.  In Kahramanmaraş, when not inspecting market vendors’ sacks of chilli flakes, we were mainly sitting in a large, old and classy, wood-panelled ice cream parlour surrounded by all the families of the city, with all of us eating plates of the famous Maraş ice cream … with knives and forks.   For Maraş ice cream is made with sahlep – the dried and powdered root of a particular orchid that grows in the area.  The result is a very solid, almost chewy, ice cream that can stand room temperature very well and also be stretched into long, strong strands by the skilled dondurma serving men.  Not that we got to see this legendary spectacle when we there.  How on earth do you make such a thing, we asked.  “Goat’s milk, sugar, sahlep and a lot of hard work” was the secretive waiter’s response.