Wild Pacific salmon has been in season here (apparently), so I have been
playing around with gravlax.  This is really easy, and worth
experimenting with now so that you can make a batch for Christmas and
impress everyone with it.  I like it cured with allspice and whisky but
you might like other flavours.  Please let me know what you try… 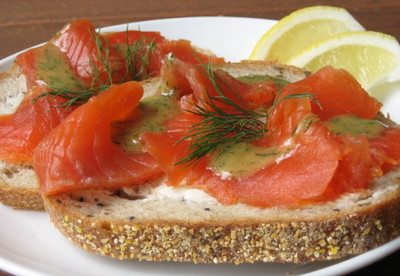 Both the salt and the sugar cure the fish.  They draw out water by osmosis.  This kills the bacteria in the fish, or at least stops them reproducing.  Meats have been preserved by salting for thousands of years.

You don’t have to be too precise about the quantities of salt and sugar.  Different people like different proportions.  The Americans tend to like it more sugary, and the Europeans more salty.  You could experiment with different proportions until you find the one you like best.  I tried it 50:50 and found it too salty, so tried again this way, and liked it better.

Different salts have very different levels of ‘saltiness’.  If using kosher salt you should increase the quantity (volume).  This is because kosher salt crystals are bigger and more irregularly shaped, which means they don’t pack down as densely.  A teaspoon of kosher salt will have approximately half the sodium chloride in it as a teaspoon of regular table salt.

Kosher salt is so called because it is used to kosher meats – ie to draw the blood out of them.  Being larger, the crystals do not dissolve so easily on the meat and therefore stay on the surface longer, drawing out more liquid.

For the best gravlax buy some really good quality, fresh, wild, dark pink salmon.  Most Pacific salmon is wild-caught, whereas most Atlantic salmon is farmed.  Wild salmon is pink because the salmon eat krill and other little shellfish (which is also why flamingos are pink), whereas farmed salmon may well have had its pinkness injected.

You can also experiment with flavourings.  My favourite (so far…) is with allspice and whisky.  Let me know what you try…