Having an offal day 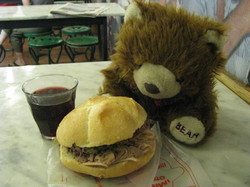 Today Barnaby went for lunch at the Nerbone food stand in the covered market in Florence.  He thought he should order something typically Florentine, so he ordered what he saw lots of the market traders were having – a lampredotto sandwich.

He wasn’t actually sure what lampredotto was, but expected it would be something nice.  Sounds a bit like lamb, he thought.  He likes lamb.  Or maybe risotto.  He likes risotto too. 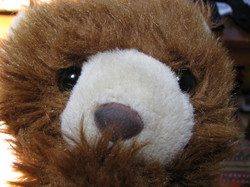 But then he took a look inside … 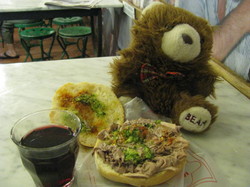 Turns out that lampredotto is actually a kind of thin flat greyish tripe.  Not being the biggest fan of offal (or “variety meats” as his more euphemistic American cousins call it), it took some persuading to get him to try it.

But once he’d got stuck in, he found it was pretty delicious – tender and juicy and meaty, with plenty of lovely green herby salsa verde and hot chilli salsa piccante.

Next he’s gearing himself up for some trippa alla fiorentina …