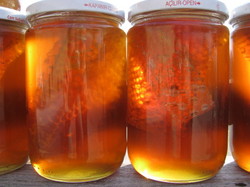 We all know that bees make honey from nectar.  But did you know that they ingest and regurgitate the nectar several times before laying it in the honeycomb?  Or that they use their little wings to fan the honeycomb to evaporate enough moisture from the honey so that it cannot ferment?

Honey has so much sugar and so little moisture that you can keep it your whole life without it going off.  The sugar kills most bacteria and the lack of moisture prevents natural yeasts from reproducing.  Someone once found a 2000-year-old pot of honey in an Egyptian tomb and said it tasted great.

However, the low level of bacteria still remaining in honey is a potential danger for infants.  Bees can pick up botulinum spores, which may cause infant botulism in children under the age of one.

‘Mad honey‘ can be produced if the bees have visited rhododendrons, azaleas or mountain laurels.  It is psychoactive and poisonous to humans due to the presence of grayanotoxin.  The effects of ‘mad honey’ have been reported for centuries, but it is very rare.

So when you eat my wild flower honey ice cream you can thank the 288 honey bees who helped you make it.

Honey is said to be healthier for us to eat than refined sugar as it
contains more fructose and glucose (and less sucrose) and also a handful of other useful enzymes, vitamins and minerals.  It also tastes better.

Apparently, Democritus (460-370 BC), a Greek philosopher and physician, chose a diet rich in honey and lived until he was 90 years old – a very ripe old age in those days.  Which means it’s good to eat lots and lots of honey ice cream…