In search of the perfect pig

As we got higher into the Pyrenees, the road signs got gradually less French.  Call it Occitan, call it Catalan – whichever way you look at it we were moving into new territory.  As if to illustrate the point, we also quickly found ourselves in the middle of the biggest hailstorm I’ve ever seen.  This, of course, was the perfect moment to discover that our sunroof didn’t seal properly. 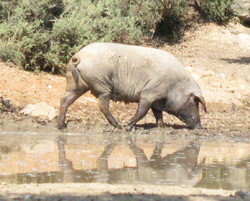 We’d come to Spain to settle an argument.  Ever since visiting Hungary, something had been nagging away at us (and I don’t just mean Barnaby).  Which is the true king of pigs?  In the Spanish corner, the pata negra pig, black of foot, fed on acorns and cossetted like a prize sumo wrestler (do sumo wrestlers eat acorns? Probably).  In the Hungarian corner, the mangalica, curly of hair, and a whacking 70% body fat.  Both tasty, no doubt – but in the world of cured pork products there can be only one winner.  Only time, and extensive sampling, would tell …

Soon enough we worked our way down from the mountains and found ourselves sitting under fig trees outside El Folló, where we spent the next few days being introduced to Catalan cuisine and culture by Mercè and Jaume.  From pa amb tomàquet to mel i mató to snails, duck confit, cava, cremat and folk singing at the local festa major, they left no stone unturned in making sure that we got to try (and join in with) everything.  Mercè even let Anna help out with their preparations for the weekend’s wedding (decorating the cake!) – and let all of us sneak bits of the food away for lunch.  We hope we’ll be back to learn more.

Ducks and snails are all very well – but where were the pigs?  Perhaps we’d have more luck in the big city.

So to Barcelona, arriving late to meet Pedro and Arantxa for lunch.  Not that late to begin with – at least not by our standards – but if you’ve ever tried to park a 2.2-metre high vehicle in Barcelona’s generous supply of 1.95-metre car parks, you’ll know that this was not to last.  Especially if you’ve also tried following this up by getting your credit card stuck in a metro ticket machine on a Sunday.  Fortunately, this being Spain, our hosts had been out until 6 in the morning and were even later than us.  Lunch turned into a decadent and entirely special evening drinking cognac around the squares of Gràcia – let’s not leave it so long next time.

Once we’d recovered, we did get our bearings enough to start seeing the porky traces we were looking for, in the form of the long thin cured fuet sausages – delicious.  But no sooner had we got our hands on these, than it was time to forget our Catalan and pretend to learn Basque, as we headed up through Aragon to the Donamariako Benta.  Here the pigs were even more in evidence, and we came across our first mysterious secreto de cerdo (there would be many more).  Thanks to Haizea, Lorea and Lulu in the kitchen who let Anna in on the recipe for their excellent croquetas (there would be many more of them too).  And thanks for the pintxo recommendation in San Sebastian – easily the best we had while spending a rewarding evening discovering that Basque cider tastes just like Crone’s scrumpy.

Further west, and the weather got wetter, the scenery greener, and the language more Portuguese.  Galicia seems to combine many of the best bits from all over Europe, and I had to work hard to stop Anna from putting offers in on farmhouses as we passed them.  There’s pies as good as Greece!  Herb liqueurs as good as Croatia!  Queimada as good as (well, exactly the same as) cremat!

And octopus and caldo and a whole lot more (including lots of strangely stale cake, but we’ll gloss over that for now).  Manuel in Trives and Ramona in Reigosa looked after us wonderfully, and taught us all about these things and lots more.  And we even had our first sniff of good jamón, as Ramona showed us how she made her own.

But time was flying, and we had to get to Madrid, to visit old friends and get visas for Mauritania.  Rob and Ana put us up and fed us at a moment’s notice.  Ben and Elia did our laundry, gave us a home from home, and even persuaded Elia’s aunt to teach us how to make potaje de quaresma.  And Clara Maria Amezua, who we’d met all those months ago in Crete at the Mediterranean food conference, had us to dinner, showed us how good ibérico pork can taste even when it’s not cured, regaled us with anecdotes about Elizabeth David, and introduced Anna to her daughter Maria and their great Alambique cooking school.  Thank you to all, and I hope we get to meet up again before too long.

That didn’t actually leave us with much time to sample the famed Madrid night life, but we had more important things to worry about – we’d found out where we needed to go to settle the pig question – Jabugo, up in the hills where Andalucia meets Extre
madura.  Here we found a town built on pork:

acorns cover the ground in the classic dehesa landscape, ibérico pigs snuffle around after them, and look through a first-floor window in any of the surrounding villages and you’ll see nothing but the outlines of dozens of slowly curing hams.  We met the pigs at La Silladilla, and learnt all about the various kinds of ham and sausage at Sánchez Romero Carvajal.  The ideal situation to settle that pig question once and for all: and with apologies to our Hungarian friends, we had to go for the pata negra.  Not because of the jamón, or even the chorizo, mind you: it was the caña de lomo what won it.

And that was it, really – it was nearly time for the ferry to Morocco.  We spent a day or two in Jerez learning about sherry – a little bit at Tio Pepe, and a lot more at Bodegas Tradición – so we now know the difference between fino, amontillado and palo cortado, and I bet not many of you can say that.  We had a short but very relaxing stay in a fabulous yurt, made a quick trip to Ronda to meet up with Anna’s sister Rhona, and tried a few of the popular Andalucian Moorish pinchitos morunos kebabs to prepare ourselves for the move south.  Not much scope for pork products there, perhaps, but plenty of adventures to be had …

You can see some of our photos from Spain here.