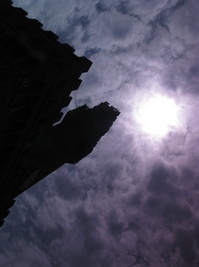 As we rolled off the overnight ferry, we were temporarily unsure what country we’d got to now.  One look at the customs official, though – his designer shades, his artfully designer-crumpled shirt, and his lack of interest in messing either of them up by checking through the chaos in the back of the car – and we remembered: at last we’d got to Italy.

We’d been looking forward to this from a culinary perspective – who doesn’t like Italian food? – but pretty soon came to realise that our broad concepts of what Italian food really consists of were at best simplistic, and more often than not, just wrong.  Our first meal brought this home to us, as we discovered the Puglian cucina povera classic ciceri e tria in Lecce.  It’s pasta, but not as you know it: with chickpeas adding an Arabic touch, and fried pasta strips seeming almost Chinese.  A good start …

Our friends Kate and Enrico let us stay in their lovely apartment in Alessano – now for sale if anyone’s interested, where we managed to fit in plenty of sunbathing and swimming between meals.  They even put us in touch with Agriturismo Matine who taught us about proper bruschetta, and kindly let Anna into their kitchen to learn how to make melanzane alla parmigiana – thank you.

Laura and Stefano from Matine then took us out into the fields to see their old, crumbling but seriously impressive maseria – the traditional stone manor-house in these parts.  This is where the landed families lived, surrounded by olive fields tended by tenant farmers or sharecroppers, with their smaller dry-stone houses (the square southern Pugliese equivalent of the more famous round trulli further north).  The countryside around here is dotted with them, and many (like Stefano’s) are seriously in need of repair.  If someone’s interested in a serious repair project, get in touch … 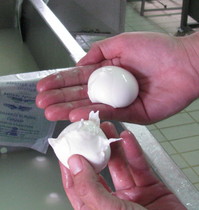 From there we headed over to Campania (via some amazing scenery in Basilicata), in many ways not the most beautiful part of Italy, being quite flat and with some stretches of beach reminiscent of the less desirable parts of Merseyside, but making up for it with amazing Roman ruins at Paestum, awe-inspiring thunderstorms, and fields of mozzarella-producing buffalo.  The Azienda Agrituristica Seliano took us to the small factory where their cheese is made, introduced us to their buffalo, and explained everything to us.

But we couldn’t stay there long, as Anna had to turn up for work in Rome: helping the kitchen at the American Academy produce quality organic Italian food for hundreds of people every day.  I think she had a lovely time (and may even go back next year), but I was too busy exploring the scooter-filled streets around our apartment in Trastevere, trying the ice cream across the river at San Crispino, and generally pretending to be in a 60s new wave film.

In fact, she was enjoying having a day job so much that we moved on to Florence (pausing briefly in Montepulciano to check out Emily and Stuart’s excellent lunch recommendation Acquacheta) where she spent a stint helping in the kitchen at Zibibbo, where she helped cook (and I helped eat) probably the best and most interesting food we were lucky enough to come across in Italy.  Meanwhile I took Barnaby out to investigate the Florentine preoccupation with exotic varieties of offal.  Apparently there was some nice art in town too, although it was hard to get too close through the dense crowds of competitively braying American exchange students.

However, any uncharitable attitudes to our transatlantic cousins that this might have induced in us were immediately dispelled on arrival at Spannocchia, an old Italian estate now run as a charitable foundation based in the USA (the family owners having moved there back in the 1920s).  They run their own organic vegetable garden, raise rare-breed cinta senese pigs, make delicious salume and vin santo, and do all this while teaching about a dozen interns how to do it too.

The people are lovely, the place is beautiful, and we’ll definitely be going back to learn more.

Beyond a couple of delicious lunches including some great Montalcino wine (thanks Emma for the recommendation) and the best lardo we’ve ever tasted (thanks Wendy), that was it for Tuscany: next on to the serious food territory of Emilia-Romagna.  Bologna was over before we knew it, but we still had time to try the bollito misto (OK), take a cooking class with Carmelita Caruana (excellent) and drink several varieties of espresso at Terzi (out of this world).

Mantova next – the flat paddy-fields of the Po valley, where we stayed in Il Galeotto rice mill to learn everything we could from our host, previously awarded the local title of risotto champion – il campione del risot.  A quick evening of avant-garde mixed-media site-specific performance art (yes, we used to live in San Francisco, we know the lingo); an afternoon of spritzes by Lake Garda, and Amarone in Valpolicella at [Al Vicolo del Cedro]; several interesting risottos including one filled with tiny rice-field-dwelling shrimp; and some incredibly hot pharmacy-strength mostarda, and we were off again heading east through the rice plantations.  Well, actually maize mostly, it seemed, as with so many places we’ve been – but I’m sure someone’s still growing some rice somewhere.

One final stop in Friuli, where we headed optimistically to San Daniele where we discovered two things: firstly, it’s actually called San Denêl if you’re Friulian, and secondly, it may have the best prosciutto in Italy, but it’s still quite possible to find the overpriced pink floppy plastic version if you try hard enough.  But we soon got over that by going to Casale Cjanor agriturismo, where they make the rare soft pestat sausage, as well as some delicious cured goose breast and lardo.

You can see some of our photos from Italy here.