One of the many good things about travelling in Senegal was the widespread availability of fresh fruit, root and flower juices, typically sold in small plastic bags by smiley, buxom ladies on street corners.  At first perplexed as to how one drinks from a plastic bag, we soon learnt you nip off a corner with your teeth and then suck out the delicious juice as you continue round the market.  Nothing could be better on a hot, dusty day. 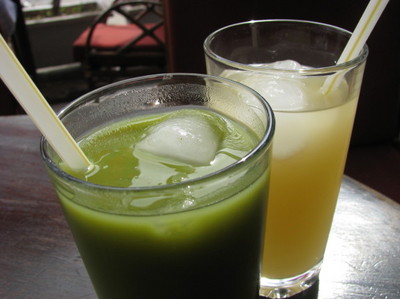 Ginger was our favourite; its intense zinginess can’t fail to jolt you awake and fill you with an overwhelming sense of vitality.  Also excellent were bouye (made from the fruit of the giant baobab tree), ditakh (some kind of cucumbery tasting fruit we never identified), and bissap (infused with dried, crimson hibiscus flowers, often with mint).

Sadly most places geared up for foreigners served only Coca-Cola and the like, and we met travellers who’d somehow managed to cross Senegal without even realising these wonderful natural juices existed.  But we became addicted to them (while bearing in mind the seller’s likely water source).

Aside from the obvious economic benefits (our CFA went directly to the women who made our drinks), there were health benefits too.  Gingembre is widely recognised to give energy, stimulate the appetite and aid digestion, while bouye is said to soothe tummy trouble – in fact we met a man who swore it cured the runs.

These real juices reflect the crops and wild foods in this part of West Africa.  They must be just a few of the thousands of natural, local drinks around the world which find themselves in competition with the almighty and ubiquitous Coca-Cola.  Practically the only hotel we found serving ‘jus locaux’ was the wonderful Hotel le Djenné in Bamako, owned by Aminata Traoré, Mali’s former Minister of Culture.  Known for her strong anti-globalisation stance, Aminata would never serve Coca-Cola. 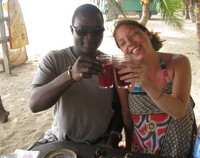 At our final destination, Green Turtle Lodge in Ghana, we made rounds of gingembre and bissap for friends on the beach.  I pounded ginger from Takoradi market with my enormous Senegalese mortar and pestle (thus proving to Matt how useful the four giant mortars I had purchased would be).  The juices went down a treat with a heavy lacing of Burkinabé rum.