Kebabs we have known and loved

It would be a gross misrepresentation to suggest that Turkish food is all about kebabs.  It really isn’t.  Sure, they’re famous – ask the average man in the UK street to name a Turkish dish, and he’ll probably tell you about döner kebabs.  (Fair enough – nothing else tastes quite so good when all the pubs have shut.)  But as we’ve discovered, 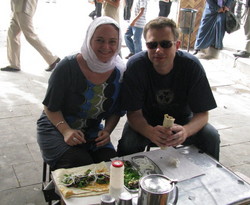 Turkish cuisine is really all about everything but kebabs – the finely spiced Ottoman rice dishes, the seafood of the north, the spices and sweets of the south-east, the olive-oil-braised vegetables and wild herbs of the Aegean. Don’t get me started.

But having said that, there’s a lot of kebabs in Turkey.  And sooner or later, you’re going to end up eating one.  And there’s a lot more variation – and flavour – in the kebab world than you might think.  Some of them, in fact, are downright delicious.  So to help you find the best and avoid the less desirable, here’s our all-time top most tasty kebab list.

Before we get started, here’s what you need to know to spot a kebab when you see one:

And so, on to the results.

Our winner was the fıstıklı kebap at Şirvan in Gaziantep.  Minced lamb, finely ground bulgur, fresh mint and the famous Antep pistachios formed around a skewer and grilled.  The outside was a bit crunchy, the herbs and hot pepper made it fresh and a bit zingy, and the full pistachio flavour
topped it off.  It helped that Şirvan himself kept the place open late just for us, and served it to us at our own table outside by the side of the road!  Thank you Şirvan, and thank you too to Filiz Hösükoğlu for setting all this (and more) up for us. 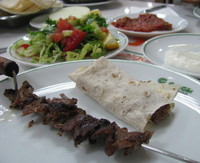 Coming in a close second is the Erzurum cağ kebab – a kind of horizontal döner, but nice.  The lamb slices are roasted on a horizontal spit over a wood fire; then little L-shaped skewers are threaded through the cooked bits on the outside as they’re sliced off and presented to you.  You wrap bread round them & slide bits off the skewer, wrap it up with salad, peppers, yoghurt, chilli paste, lemon etc. – and the whole thing has a delicious smoky/woody roast lamb taste.  We had ours at Gelgör, who claim to have invented it, have been going since 1975, and sell nothing else.  Their cooks certainly know their stuff: they can keep the fires going with hairdryers with one hand, while smoking with the other.  The diner’s record is 33 skewers at one sitting; we managed 2 each – but we’d have eaten more if we’d had room. 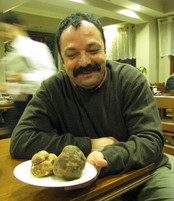 Third, but only because we docked it points for cheating by being prepared by an internationally renowned chef, comes the keme kebabı we had at Çiya in İstanbul.  Keme is a  kind of truffle – it doesn’t reach the standard (or price level) of French or Italian counterparts, but it’s pretty delicious (nutty, earthy and mushroomy) and gave these ground-meat köfte-style kebabs a wonderful full savoury flavour.  It can’t be as simple as adding keme to meat, though – we had another version at Imam Çağdaş in Gaziantep and it wasn’t half as good (and lots of their food was great).  We suspect Musa Dağdeviren at Çiya has some other secret he’s not telling us – or perhaps he’s just an excellent chef.

Back on the streets, fourth place goes to the marketplace stall in Şanlıurfa.  Were these the real Urfa kebabs or not?  We don’t know for sure, but they were delicious – basically Turkish burritos.  They came as small skewers, either threaded through liver chunks, or with ground spiced meat (with plenty of hot pepper) formed around them.  As they came off the grill, we spread out sheets of thin açık pide bread (stretchy and chewy, rather like a Mexican flour tortilla), added raw onion, fresh parsley and mint, and salt, and rolled them up into long tight wraps.  (Anna was quite good at this – although apparently, being just a girl, she should have let me do it for her.  Oops.)  Then we tucked into them while watching Kurdish men in blue headscarves drink liquorice juice.  Yum.

Following up in fifth place is the Ali Nazik kebabı.  We had different versions of this at Imam Çağdaş (köfte-style ground meat pressed on skewers) and Şirvan (with şiş-style meat chunks too, and with hazelnut in the ground meat).  But the important element was the same in both cases – the juicy spicy meat sat on a bed of delicious roasted aubergine mush, with lots of yoghurt and garlic, and some spicy red peppery oil drizzled on top.  Hard to go far wrong with that.

Honourable mention goes to the testi kebabı, essentially a meat & vegetable casserole cooked in an earthenware jug.  The version we had wasn’t great, but it probably could be, as it’s a pretty great idea.

The jug is stoppered with a dough plug and baked slowly in the oven for hours (or sneaked into the microwave for rather less time at less scrupulous restaurants).  Then it can be dramatically opened at table, by breaking the bread stopper off with a great big cleaver (well done Anna).  And also to the patlıcan kebabı, meatballs alternated with big grilled aubergine chunks, which we had good versions of in several places – including our first properly eye-opening kebab experience at Hamdi in İstanbul.  It was here that we first came across kebabs served by liveried waiters over white tablecloths, and realized that all kebabs are not equal.

There were other good ones too, of course: we had some great Adana-style kebab in Urfa; good şiş kebabı in a few places; perfectly OK yoğurtlu kebap in Istanbul.  Some rather less inspiring choices, too: soggy İskender kebap in Erzurum; dull Amasya kebab on a bed of tasteless chips – and more I won’t go into.  But stick to the winners and you’ll be fine.

And if you like them, you’ll probably like meatballs (köfte) too. But that’s a whole other story …