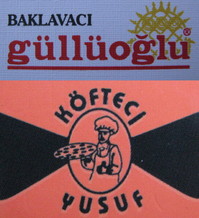 Well, after my initial excitement about Hungarian and its way with vowels, I’ve been even more excited to be surrounded by people speaking Turkish.  As with Hungarian, it’s unrelated to any of the European languages I have experience with, so most of the words are unrecognisable (although there’s some noticeable French influence which makes a few things a bit easier), and the basic structure is very different too (verbs go at the end, for example).

Importantly, this means it manages to rival Hungarian in the unguessability of its word for “wine”: I think şarap is just as hard to spot as bor for an English-speaker; although “beer” comes as the disappointingly obvious bira rather than Hungarian’s near-unbeatable sör.

Even more excitingly, there’s vowel harmony here too.  But it’s even better. 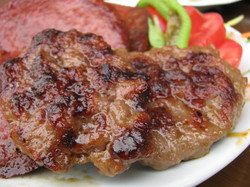 So, just as Hungarians can add -zó to turn bor (“wine”) into a borozó (“wine bar”), Turks can add -ci to turn köfte (“meatballs”) into a köfteci, or somewhere that sells meatballs – if you’re lucky, the delicious juicy fresh ones we had in Iznik at Köfteci Yusuf.

But as you’re familiar with how vowel harmony works by now, you’ve probably already guessed that the -ci suffix then changes depending on the vowels in the word it’s attaching to: as köfte contains front vowels, -ci is fine; but try to open a place selling the (delicious, syrupy, flaky, but full of back-vowels) baklava, and you’ll have to call it a baklavacı instead.   (Although it still won’t be as good as Baklavacı Güllüoğlu, which we visited in Gaziantep).

Yes, that last letter was an i without a dot: ı.  It’s pronounced in the back of the mouth rather like an English “uh” sound.  Exciting, I know, but let’s not get distracted – there’s more. 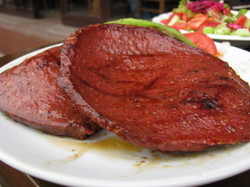 Turks aren’t satisfied distinguishing front (e/i/ö/ü) vowels from back (a/ı/o/u) – that would be far too easy.  No, their vowel harmony is (wait for it) two-dimensional.  We also have to distinguish rounded vowels (ö/ü/o/u) from unrounded (e/i/a/ı).  So let’s say you want to open a stall selling the sizzling garlicky sausage sucuk: call it a sucukcı and people will walk past uncomprehending; call it a sucukcu and you’re in business.  And I’ll buy some, it’s lovely.

Simple?  Perhaps not – but pleasingly straightforward once you get the rules.  So now you can open your own kebab shop, and you’ll know to call it a kebapcı.

(Except, er, you’d be close – but wrong.  Sorry: just to keep you on your toes, it turns out that unvoiced final consonants like p turn the voiced c into an unvoiced ç, turning -ci (“jee”) into -çi (“chee”).  So call it a kebapçı to get them through the door, or just rely on the irresistible waft of that day-old döner juice.)