I love lamb.  It’s not as popular here in America as it is in the UK, for some
reason, but that hasn’t stopped me subjecting most people I’ve met to a
lamby dinner.  This dish has gone down particularly well, several times.
If you don’t want to deal with a whole leg of lamb, you could buy some
large cubes of lamb, preferably leg meat, make kebabs instead and call
them ‘brochettes’ to sound fancy. 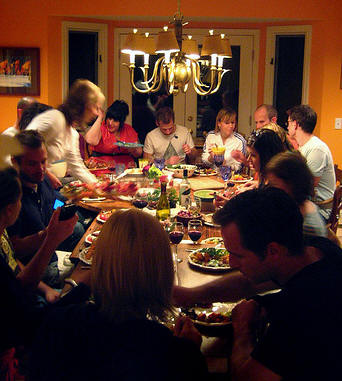 The dish uses a vaguely Moroccan spice blend, which goes so well with lamb.  It’s definitely party food – buy a whole leg and then invite as many people as you think it will feed, plus a couple more.  Thanks go to Patrick, Marketa, Megan, Kevin, Lindsay, Andrew and Carole, among others, for being such active lamb-fest participants.

Serves:  approximately 10 (depending on sizes of leg, side dishes and tummies)
Preparation time:  20 mins (or a little more if you bone the leg yourself…)
Cooking time:  30 mins

How to butterfly a leg of lamb, roughly: