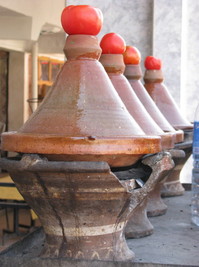 We didn’t quite know what to expect from Morocco – we’d heard very different and conflicting reports.  To some people, it’s the home of one of the world’s classic cuisines, and some of the best street food you’ll find anywhere; to others, it’s apparently an interminable round of underspiced vegetable tagines.  Which would we find?

We knew some things, of course – but there was a lot more we didn’t know.  We knew they ate a lot of couscous here – but what is it actually made of, and how?  We had to make it our mission to find out.  (Our friend Robert told us we really didn’t need to go all the way to Morocco for this –

just buy a packet from Waitrose and pour boiling water on it.  And he has a point.  But it turned out there’s a lot more to it than that).

And we knew they drank a lot of tea, too.  But we really weren’t expecting the crumpets …

We drove off the ferry from Algeciras just as the sun was starting to set, full of trepidation as we nosed our unfortunately oversized car up into the scarily narrow streets of the Tangier medina.  As luck would have it, nobody was coming the other way, and we managed to make it unscathed to our rendezvous with Keith’s Aunt Maggie.  Within ten minutes we had followed her through a maze of alleyways to her lovely airy medina house and were enjoying our first Moroccan gin & tonics (a theme which would continue).

The next morning we were enjoying our first rghaif, courtesy of Fatna in the kitchen: a theme which would do more than just continue – in fact it would pretty much dominate our mornings from here on (together with the lovely proper fresh orange juice which seems to crop up so often in Morocco – we still miss it).

Rghaif is the name for a whole class of pancake-like things, spanning a wide and entirely delicious range from the meloui we were eating for breakfast right up to (although we didn’t suspect this yet) the Moroccan equivalent of the crumpet.

And this was the perfect start for a few days in Tangier, which in itself was a perfect introduction to Morocco.  Tomas taught us our first Arabic phrases, and some top bargaining techniques; Maggie took us round town to classic 60s beat hangouts on the cliffs, and introduced us to the street stalls which sold bisara, the delicious Moroccan pea soup, and köfte to rival Turkey; while Fatna taught Anna how to make the classic olive-and-preserved-lemon chicken tagine and equally delicious lamb and quince tagine.

Thank you to all, but especially to Maggie for being the perfect Tangier host – we’ll be back for more G&Ts and gossip.  And we caught a fleeting glimpse of one of the mysteriously familiar breads that would turn up throughout our stay: up on a bakery shelf, a pile of mtlor – they called it “a kind of bread”, but we were English and we were pretty sure that was a muffin.

But no time to find out about that now – we moved on to Fes and the start of the tourist trail proper.  Having promised ourselves never to drive after dark, we found ourselves arriving on the ring road a good hour after sunset, being greeted by swerving hotel hawkers on motorbikes.  However, we’d armed ourselves with an Alastair Sawday guidebook and a telephone, so we made it somehow into the right medina gate to a very warm welcome from the wonderful Abdel Kader and Monique at Riad Norma, which included our second (and third) Moroccan gin & tonics, our first tagine with raisin-n-onion dressing, our first plate of sliced oranges laced with orange flower water for dessert, and a generally relaxing time in a very beautiful house.

Fes was mixed from a culinary point of view, and we started to understand how easy it is for tourists to find bad food (and underhand, dishonest, cheating guides – but that’s another story).  There’s a lot of mediocre stuff around, and even at the highly rated Maison Bleue we found that much of it was average at best (although the “mixed Moroccan salads” – a Turk would call them meze – were excellent).

But out on the streets of the medina, there was some fantastic food around: from the warm chickpea cake with chilli salt; to the butterflied chermoula sardines; the fried egg, potato galette and chilli sandwiches; the small spiky red fruit sheshnu; and (for me at least) the stuffed spleen kebabs.

Even more excitingly, there were stalls dedicated to rghaif, and we finally sighted our first crumpet.  Young Yusuf may have called it beghrir, but we knew better – it may have been 18 inches wide, but it was definitely a crumpet.

And somewhere out there, there was warka
too.  We saw it being sold, heard rumours about where it was made – but efforts to actually find out about the process came to nothing (at least for now).  It’s made by women, you see, and in Morocco that means it’s not made in public …

Thus prepared, we headed south, stopping in Ifrane for a pleasant if slightly surreal (although with the tastiest apples we’d had since Kent) stop by a dry lakebed in the foothills/, then carrying on over the even drier Middle Atlas proper and down through unbelievably lush oases, full of green palm trees and pisé kasbahs to Erfoud.  We’d come here to the edge of the Sahara expecting two things: sand and dates.  To ensure this, we’d even timed our visit to coincide with the beginning of the dry season, and the annual Date Festival.  We arrived, though, to find heavy rain, roads washed out, bridges down, and the festival not at the forefront of anyone’s mind. 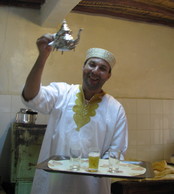 However, a few entertaining kilometres following marker poles through the desert, and we arrived at Kasbah Derkaoua, where we changed our plans to learn about tea and msemmen instead.  Ahmed taught us all about the finer points of Moroccan tea-making – boiling the water in the pot with the (green) leaves, throwing out the first bitter brew, when to add the sugar and the mint – and above all, how to pour it to achieve the all-important mousse.  And Khadija taught Anna how to make our favourite type of rghaif – the stuffed msemmen.

Meanwhile we went to play in the dunes, rode on camels with Diane and Janet from Mendocino, and went round the corner to Chez Tihri in Merzouga where Fatima and Anora taught us how to make (freshly killed and skinned) rabbit tagine (although we weren’t allowed to actually eat any – it was all for our friends the pompous cigar-chomping Spanish quad-bikers).

So we had tea, crumpets and plenty of rghaif under our belts (and in Anna’s notebooks) – but what about the couscous?  Clearly the desert wasn’t the place to learn; we had to head back up towards the mountains.

Our first stop was in El Kelaâ Es M’Gouna at Kasbah Itran – and we’re extremely glad it was.  As soon as we walked in we realised we were somewhere special, from the tea on the terraces overlooking the valley full of quinces, rose-bushes and ancient pisé kasbahs, to the communal after-dinner singing.

The Taghda brothers who run it are as welcoming and friendly as you can imagine – we spent lots of time in the kitchen learning from chef Mohamed, and left feeling like part of the family.  More to the point, they know people who know how to make couscous by hand: and not just any old couscous, but the special large-grained mountain barley kind.

We soon found ourselves at Abdou’s mother’s house, making msemmen, couscous and tea with three generations of Fatimas.  Thank you Abdou, Mohammed, Toda and all the Fatimas for a wonderful day.

We also met Elvira Jungslager, who then introduced us to Addi.

Not only do
es Addi run a guesthouse in one of the most scenic spots of the Atlas (the Todra gorge), he has a sister, Rabha, who also knows how to make couscous.  He very kindly arranged for us to spend some time with her way up in her village, Aït Hani, where we finally answered all our questions, made by hand (and ate by hand) some delicious couscous,

and got an introduction to the wonders of smen and some bread-making lessons into the bargain.  Very many thanks to Rabha and Hadda, to Malika from IFAD for doing all the interpreting, and to Addi for setting it all up.  If anyone’s looking to buy some high-quality hand-made couscous, there’s a women’s group making it in Aït Hani who need more buyers!

On the way down through the gorge we found the date harvest in full swing, but after that we decided to head for some more city life – we still hadn’t been to Marrakesh.

This meant crossing the mountains again, and that gave us an opportunity to take up another of the Taghda brothers’ suggestions up:  they’d told us about the village of Magdaz, hidden away in the mountains up hours of scary rocky piste, alternating between sheer cliffs and muddy riverbeds.  After our four-wheel-drive adventures in Romania, this seemed like the perfect chance to test out the car again, so we jumped at it – stopping only to arm ourselves with the charming Mohammed as our guide, and to let it get properly dark before starting the tricky cliff bit. 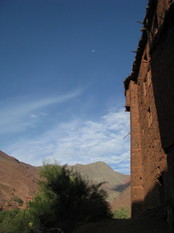 We made it, though, and had an eye-opening experience.  Life in the remote mountain villages doesn’t seem to have changed much in decades – there’s still no electricity or phones, and only one van gets in and out each day.

The scenery is incredible, the people are friendly, and the olive-oil and honey mixture is quite delicious with home-made bread and rosemary tea.  Many thanks to Lahcen for putting us up in his centuries-old kasbah.

Getting down from the mountains, though, turned out to be quite a different proposition …

You can see some of our photos from Morocco here (from Tangier to Fes), here (from Fes to Merzouga), and here (from Merzouga to Magdaz).