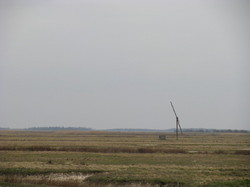 We finally said goodbye to Poland (we’ll have to go back one day, there’s so much more to see) and drove south through Slovakia to Hungary.  As we were a bit behind schedule we rushed through Slovakia in a day, admiring the snowy Tatras mountains and warming ourselves up in hot springs (and some of the best saunas we’ve seen) at the fairly-tacky-but-wonderful Tatralandia resort.

It was a shame not to have longer, but this did mean more days to check out all the wonderful Hungarian food – and wine – and more time to zigzag all over the place rather than planning a sensible route.  We learnt lots, but three things stick out.  Firstly, the wine’s excellent.  Secondly, most of Hungary’s pretty flat.  OK, really flat – think East Anglia but with more moustaches.  Thirdly, goulash isn’t what you think it is …

In fact, goulash (or more properly gulyásleves) should really be a soup, thinner than the Gulaschsuppe you come across in Germany and certainly not like the stew we’re used to in the UK.  Hungarians who saw our “goulash” would probably call it pörkölt, or perhaps paprikás, or maybe even tokany.  Confusing: but we worked our way through them all and will bring you recipes soon. 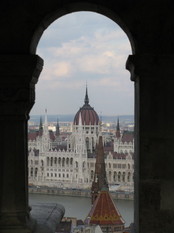 We started in Budapest, mainly because it’s the first major place you come to when crossing the border from Slovakia (we hadn’t realised just how close it is to Bratislava and Vienna, in fact).  It’s changed a lot since we were there in about 1995 – a lot more going on, full of shops and restaurants and coffee houses.  It’s a lot more expensive, now, of course, and perhaps there are a few too many trendy bars and not enough grimy borozós for our taste, but it’s a beautiful city for wandering around and admiring the views and the goulash in all its myriad forms.

Then on to Pécs where we found a properly grimy borozó and a beautiful Turkish mosque-turned-church, and then across to Szeged to learn about paprika and salami, as well as finding out what rooster testicles look (and taste) like.  Not bad, as it turned out, but for some reason we then felt a need to turn north towards the hills (there are some!) to 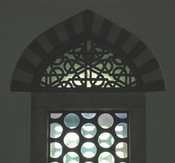 clean our palates with some wine – stopping only to stay in a beautiful traditional fisherman’s cottage in Csongrád so that we could practise making our own gulyásleves (quite different to my previous ‘goulash’ recipe).

This meant heading to Eger, another beautiful fortified town mostly famous for its red wine (Bikavér, or Bull’s Blood) but actually making more white.  We sampled quite a few straight from the cellars in Szépasszonyvölgy, including some pretty classy Leányka, Zengő and Kékfrankos from the posh-looking cellar on the left and some rather more rustic (but very drinkable) “red” and “white” from the two old men across the road.

After that we headed out onto the puszta (the great plain – if we thought we’d seen proper flatness before, we were wrong).  Here we (and Barnaby of course) got to meet all the traditional Hungarian curly-haired dogs, pigs, geese and sheep, and the biggest, scariest-looking ox you can imagine.  We also learnt how to make old-fashioned baked langos bread and the tastiest cured pork fat we’ve met so far (it’s the paprika) – and how to play the pig’s-bladder-based köcsög duda (hear it here). 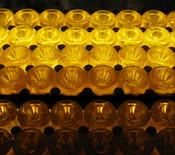 Finally, it seemed appropriate to round up all this feasting with some dessert wine, so we headed north again to Tokaj, where we learnt all about how they make the famous botrytised Aszú wine as well as many other excellent drier versions (we particularly liked the Hárslevelű and the sherry-like Szamorodni), and met a chef attempting to modernize Hungary’s excellent (but admittedly not traditionally light) food.

Then it was time to head across the border into Romania, where we are now.  We’ll let you know how we get on.

You can see some of our photos from Hungary here.