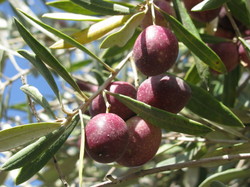 Some olives in Morocco. Although they could
just as easily be in Spain.

I’d always wondered why the oil and vinegar seemed to be labelled wrong in Spain.  If, like me, you’re more familiar with Italian than Spanish, and you see two bottles on the table, one labelled “aceite“, you’d be pretty sure that was the vinegar.  You’d be wrong, though – although admittedly you’d work it out pretty sharpish if you saw that the other one was labelled “vinagre“.  Or just tasted it, I suppose.

The Italian aceto (vinegar) comes from the Latin acer meaning ‘sharp’ or ‘sour’, and that’s where we get English words like acid and acetic from too.  (Even the word vinegar comes this way, in fact, via the French vin aigre or ‘sour wine’).  Similarly, the word for ‘oil’ seems to have Latin origins in most European languages – the Latin oleum gives us oglio, oil, Öl, huile and so on.  So why would Spanish (a Romance, i.e. Latin-based language) be so different, and where does their word for ‘oil’, aceite, come from?  Well, now that we’ve made it to Morocco, all becomes clear …

Of course, one explanation might be that the Spanish word for ‘olive’ is aceituna – so perhaps that’s where aceite comes from?  Living in Spain during the development of the Spanish language, you might expect most of your oil to come from olives, after all.  Probably true, but not really much help.  For one thing, it’s not just in Spanish that those two words are related: the English words oil and olive are also clearly pretty similar to each other.  You could say the same for the Italian oglio and oliva, and many others.  For another, it doesn’t get us much further anyway – why would the word aceituna be so different from the variants on olive used by most other Europeans?

The reason that so many European countries share Romance linguistic backgrounds, of course, is the fact that they spent so long being ruled (or otherwise influenced) by the Roman empire.  The local languages thus either developed directly from, or borrowed many terms from, Latin.  This might be especially true for words related to Mediterranean phenomena like olives and their oil: even distant northern countries which spent relatively little time under direct Roman rule (England, for example) presumably learned about and obtained these things from more southerly Latin people.

And Spain is no exception – the Romans were there for 500 years, and that’s why Spanish is essentially Latin-based (hence its general strong similarity to Italian, Romanian and others).  However, even the briefest look at Spanish history will tell you that another empire spent even longer there, ruling much of the country for about 700 years: the Moors.

After the establishment of Islam in the 7th century, the Arabs expanded westward across North Africa, and then north from Morocco, taking control of most of the Iberian peninsula by the early 700s – and keeping it until the late 1400s.  And if we look at a map of Europe in isolation, it’s easy to forget that Spain and Morocco are only 14 miles apart – the ferry across the channel between Algeciras and Tangier only takes an hour or so.

So you’d expect Spanish to show significant Arabic influence too, and indeed it does.  It’s easy to see this in Spanish placenames, which often start with the Arabic prefix ben– (meaning ‘son of’), as in the universally admired Benidorm; or with al– (the Arabic definite prefix, i.e. the equivalent of ‘the’).  It’s no coincidence that the port of Algeciras, and the well-known Arabic TV news channel Al-Jazeera, have similar sounding names.  (al-jazeera means “the island” – a suitable name for both an independent news channel and a port facing, um, an island).

The Arabic word for ‘oil’ is zit (زيت), and the word for ‘olive’ is zitun (زيتون) – just like the Romans, the Arabs obviously saw olives as “things you get oil from”.  This may not seem much like aceite and aceituna – but that’s where a bit of linguistics comes in.

First, we add the definite al– prefix, giving us al-zit and al–zitun.  (al- should actually start with a glottal stop, but I’ll leave that out here.  We have it in English – it’s the sound at the beginning and in the middle of “uh-oh” – but there it’s not considered an actual consonant. In Arabic it is).  But these words aren’t actually pronounced quite this way: due to a phonological process called assimilation of place, the l in al- often changes its sound to match whatever consonant follows it.

If that sounds exotic, it’s not: the same thing happens in English.  In casual speech, a word like “unbelievable” is usually pronounced more like “umbelievable”.  The n and b sounds involve using parts of the mouth which are quite close to each other.  Saying n means putting the tip of your tongue against your top teeth, or the ridge just behind it; b means putting both lips together.  It’s quite complicated to move from one position to the other quickly, and so lazy speakers (i.e. all of us) tend to modify one to make life a bit easier.  Similarly, the back-of-mouth k sound of “incapable” makes the preceding front-of-mouth n change to something more like ng.  And this doesn’t just happen in casual speech: “impossible” has a m precisely because “inpossible” is a bit hard to say.

In Arabic, assimilation of the al– prefix is fully formalized as part of the standard language.  If the word begins with a “sun sound” – a consonant which is articulated quite close to l, such as s, sh or m – the l moves to reflect that.  (They’re called sun sounds because the Arabic word for sun, shams, begins with a sh).  If it begins with a “moon sound” – a distant one – the combination is easier to pronounce, and the l stays as a l.  Our word for oil, zit, starts with z, which involves the teeth: it’s a sun sound.

So, what this all means is that even though the standard spelling is still al-zit (ٲلزيت) and al-zitun (ٲلزيتون), we actually say az-zit and az-zitun.  And from there, it’s just a short cross-channel ferry ride to aceite and aceituna.