Places to eat in Poland 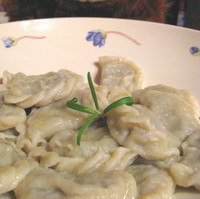 During our quest for the best żurek, pierogi (pictured), barszcz and golonka we came across these rather nice places to eat.

Should you find yourself in Zakopane, Kraków or Kazimierz Dolny (three of the prettiest towns in Poland), you could do a lot worse than dine here… 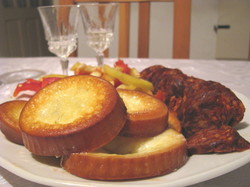 Czarci Jar, Zakopane:  For hearty Highlander fare and plenty of log cabin atmosphere, try this cosy restaurant slightly off the main beaten track.  This is where we had our best żurek – a sour fermented rye soup containing delicious pieces of white sausage and wedges of boiled egg, in this case delicately flavoured with lovage and juniper – and where we discovered the wonderful Górale (Highlander) speciality of fried slices of oscypek cheese served with crispy bacon and charred onion (pictured here when we made it ourselves).  They also serve ‘Highlander tea’ (80% pure spirit; 20% tea) or, for those less brave, an equally heart-warming yet less stomach-stripping barrel-aged miodula (honey vodka). 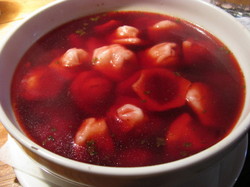 Kolibecka Inn, Zakopane:  A miniature version of Czarci Jar, conveniently located close to some of Zakopane’s ski runs and perfect for a mid-day calorie top-up (even if you haven’t braved the slopes).  We had barszcz z pelmeni – a slightly sweet, slightly sour bright purple porky-beetrooty clear broth full of yummy peppery pork-filled ravioli bobbing up and down, and danie wiejskie – a rustic combo of loose black pudding not dissimilar to haggis and pickled cabbage cooked up with delicious little nuggets of bacon and porcini. 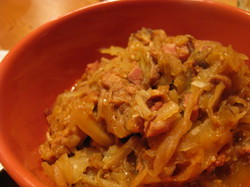 Miód Malina, Kraków:  By far the best restaurant out of the three we tried, Miód Malina (‘honey raspberry’) is understandably very popular with both locals and tourists and we were lucky to get a table.  The candles, wood-fired oven, domed ceiling and painted walls all help create a cosy atmosphere appropriate for the hearty Polish dishes such as bigos (traditionally the huntsman’s cabbage stew, pictured here when we made it with Marzena) and golonko (roasted pork knuckle) on the menu.  Their bigos is of the heavy, sweet and spicy variety, flavoured with clove, juniper, allspice etc and studded with smokey sausage and ham.  Their golonko seemed to have the house flavourings of honey and raspberry syrup, both classic Polish products, glazed over it to reasonably good effect, and went well with its bed of juicy pickled cabbage. 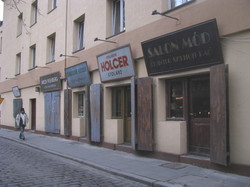 Ariel, Kraków:  Kazimierz is Kraków’s Jewish quarter and after decades of atrocious times is now very much alive and full of bohemian cafes and restaurants.  This one is spread over several Jewish grandma-style dining rooms and serves up a number of the usual Jewish dishes, including berdytchov, a lovely beef soup flavoured with honey and cinnamon, and sernik pascha, a delicious Passover curd cheese dessert studded with raisins and candied orange peel.  Our mains were less good and are sadly not worth mentioning.  Maybe we chose badly. 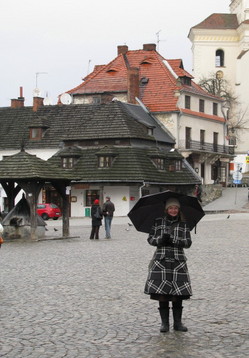 Fryzjera Knajpa, Kazimierz Dolny:  Kazimierz Dolny is THE place to spend the weekend if you’re a trendy urbanite from Warsaw.  Which is why we were surprised to find the little ancient town deserted on a Saturday night.  After wandering around in the rain only to find each of the handful of restaurants firmly closed, we finally heard music and voices coming from a dimly lit pub.  Inside we found a lively four-piece klezmer band, plates piled high with Jewish fare and plenty of youngsters, drinking and dancing the night away.  I wouldn’t necessarily recommend their chopped liver or matzo ball soup (but then I’m no Jewish cuisine expert), but the pickled brisket with prepared horseradish and pureed beetroot was fantastic, as was the juicy roast goose leg with braised pickled cabbage.