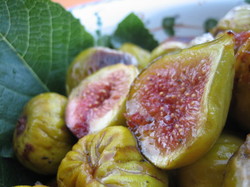 40 years ago a woman called Alice Waters founded Chez Panisse, a restaurant in Berkeley, California.  Chez Panisse has become legendary throughout America and beyond for its strict use of seasonal, local and organic ingredients and has influenced a generation of restaurateurs, diners and cooks.  I am one of them.

Of all my culinary training, work experience and adventuring, my stint in Chez Panisse’s kitchen has been the most influential, and the most magical.  I learnt how the chefs worked directly with growers to source the best produce, and how they based each day’s menu not only on what had just come in but on how each vegetable and fruit tasted that day.  Of course I learnt plenty of techniques and recipes too, some of which are on the menu tonight in honour of Chez Panisse’s 40th birthday.

As usual, much of the produce tonight has come from Riverford Organic Vegetables, and the rest via local delivery company Hubbub and my local greengrocer.

The yoghurt thing is in honour of my Mum and Dad, who have also just celebrated their 40th anniversary.  Mum’s yoghurt thing has been a family classic for decades.  I whipped three tubs of Riverford cream and then folded in one tub of their whole-milk yoghurt, spooned it into bowls, sprinkled generously with Demerara sugar and left in the fridge overnight.  Mum says it always works a treat, so I hope she’s right.

Well what a fantastic evening! Wonderful food and super company. We really enjoyed it and loved every single thing, well done, it was superb.”

Give someone a cooking class or Secret Kitchen dinner.