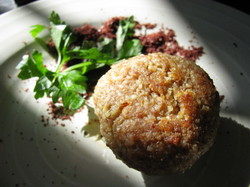 It’s not all tea and candy in Turkey of course, and meat is a very important part of the diet for most Turks.  Of course practically no pork – which was a nice change for us after our pork ‘n’ lard fest in central and eastern Europe.

Beef and lamb are the most common red meats, with beef overtaking lamb, especially in the west, due to the increase of factory farming and hence smaller price tag.  (Lower price in terms of pennies from the customer’s pocket that is, not cost to their health, the cows’ wellbeing or the environment, of course…)

And there’s plenty of chicken too, but we found those dishes less interesting.  So I’m not writing about them here.  Instead you can find out about ‘sensitive balls’…

Perhaps most representative of Turkish meat dishes is the kebab.  But it is not really ‘the’ kebab.  Oh no.  There is a wonderfully diverse world of Turkish kebabs, in which each city has its own speciality. 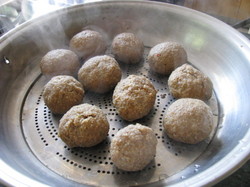 Then there are any number of köfte (meatballs), which can be simple, spicy, large or small. They can be more complicated too, like the delicious stuffed içli köfte (amusingly if misleadingly translated on some menus as “sensitive balls”) – a spicy meatball wrapped in a bulgur coating and steamed and/or fried.  Food writer Engin Akin kindly agreen to make içli köfte with me at her home in Istanbul.  It was a first attempt for both of us, and they turned out pretty good!

They can even be raw.  One of the best we had was the çiğ köfte (“raw balls”) found in the southeast, which they say is ‘cooked’ with spices.  Raw mincemeat is kneaded with spices by hand for several hours, then formed into patties and served with lettuce and fresh herbs.  Seeing the fingerprints of the cook in your patty is the sign of a quality product, as it shows it was well ‘cooked’.  We had some excellent ones in Sanlıurfa, which despite being the hottest place in Turkey is also the capital of the raw meatball.  Best not to think about it too hard. 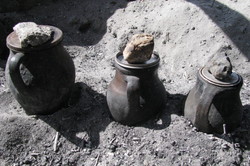 And then there are the tandır dishes.  As you might have guessed, the tandır method of cooking, and name, came from the east.  A tandır is a deep hole in the ground, in which you build a fire.  Once it’s died down and the hard-and-fast bread or gözleme cooking is done, you can very carefully lower in your sealed pot of meat (or beans, or whatever) and leave it to slow cook in the hot ashes all night long.

Of course, these days not many people have their own authentic tandır, so conventional and wood-fired bread ovens are used to slow-roast meat instead.  We saw lots of very old tandırs carved into the rock floors of the abandoned cave houses of Cappadocia, dating back to Byzantine times.  And we were lucky enough to use one when staying with Andus and Gülcan in their own ‘fairy chimney’ cave house in Göreme. 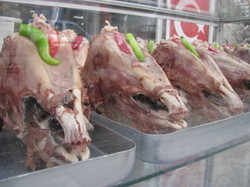 There’s lots more that could be mentioned here, such as the vast array of sausages and cured meats found in the ‘şarcuteri’ shops, which look like pork but of course aren’t.  Here you will often find pastırma, which is the original pastrami!  To make pastırma you salt, squeeze and dry-cure a section of beef rubbed with fenugreek, garlic, pepper, cumin and maybe some chilli.  They say this dates from ancient times when the nomadic Turkic tribes cured slabs of beef under their saddles – a story remarkably similar to the one we heard about the nomadic Hungarian tribes and their slabs of beef.

And I haven’t even mentioned the shops that specialise in selling sheep’s innard ‘n’ head soup, but you can see their typical window display in the picture.