Stuck in the mud near Glod 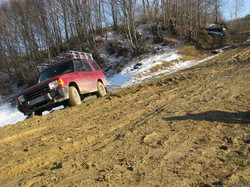 With hindsight, we can see that we made several less-than-perfect decisions on the day we left Săpântă to go exploring rural Maramureş in northern Romania.

Firstly, it was not a great idea to take the cross-country back roads through the hills on the first sunny day after heavy snow, however enticing the little village names looked on the map.  Secondly, we failed to pick up on the signals when several ‘roads’ we tried disintegrated into streams/fields/forests … 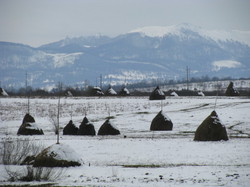 Why should a few rocks and some mud deter us – we were in a 4WD Land Rover after all – isn’t that what they’re built for?  (I think we were denying ourselves the truth, that our 4WD – a Discovery – is seen negotiating Waitrose car-parks in Hampshire more often than it is mountain tracks in Romania.) 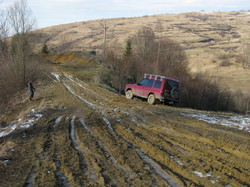 And then the one which involved turning round by making a three-point turn on extremely deep sludgy mud on a ridge separating two steep valleys.  We now realise this was foolish, as was persisting with the manoeuvre despite the car slipping a further few feet down the slope on one side of the ridge every time we tried.

Once the car was at such an alarmingly acute angle that even Matt jumped out, we decided to abandon it (leaving Barnaby on guard). 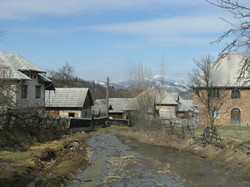 We then made the rather silly decision to walk all the way back to the last hamlet (aptly, somehow, called Glod) despite knowing that every inhabitant had just entered the church for a funeral.  When passing through a little while earlier we’d seen the small crowd of mourning men, women and children processing through the village with the coffin amid much chanting, wailing and trumpet-playing.  They were probably only a fraction of the way through the long Orthodox service, and certainly not in the mood for gathering all their horses to pull two stupid tourists out of the mud. 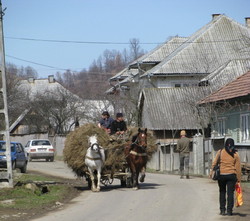 We did, however, make one very good decision:  to consult our trusty Lonely Planet (despite its proven untrustworthiness on many previous occasions), find the name of an independent guide a few villages away and give him a call.  Amazingly, within an hour George Iurca had turned up with his mate Ioan Tomşa, Ioan’s 4WD and a bunch of chains.  Ten teeth-clenching minutes later, after much wheel-spinning, clouds of diesel smoke, mud spattering and psychologically helpful pushing by Anna, our car was once again horizontal.  Had it slipped even one more foot further down the hill we all agreed it would have rolled under its own top-heaviness and come to a very uncertain end at the bottom of the hill.  Phew-ey. 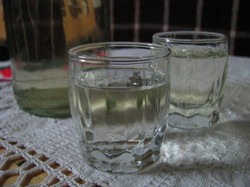 All the stress and excitement required immediate medicinal attention.  So we followed Ioan back to his house in the nearby village of Botiza, where we were warmly received by his wife Maria and a big bottle of plum firewater (ţuică).  A hearty Romanian meal and several ţuicăs later we were back to our old selves and joking about the whole sorry affair.  Luckily there were a few other tourists also staying at Ioan’s pensiune (pretty much the first time since leaving the UK that we’ve not been the only tourists staying somewhere) who were able to have a good old laugh too. 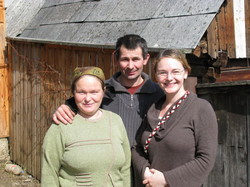 George and Ioan must have thought we were a ridiculous pair.  But they kindly did not show it, and were the epitome of courtesy throughout the entire saga, even when Matt managed to screw up reversing out of Ioan’s drive the next morning, narrowly missing piles of firewood, squawking chickens and the little stream running by the house.  Thank you George, Ioan and Maria.

You can see some of our photos from Romania here.