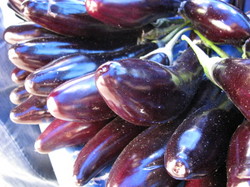 If there is one vegetable that symbolises the Turkish kitchen it has to be the shiny, purple aubergine (patlıcan).  It may not be native to Anatolia or the wider Mediterranean (it was native to India and probably reached what is now Turkey in the Middle Ages ), but it certainly suits the climate well and has become the representative, ‘traditional’ vegetable of the whole region.  We had aubergine prepared for us in numerous delicious ways.  These were some of our favourites:

Aubergine ‘salad’ (patlıcan salatası) is found everywhere.  At its most basic it’s simply the silky pulp scooped out from whole roasted aubergines and mixed with yoghurt, salt and maybe a little olive oil and lemon juice.  The smokey flavour and pleasing texture becomes addictive after a while.  Other versions may include chopped peppers, tomatoes and herbs. 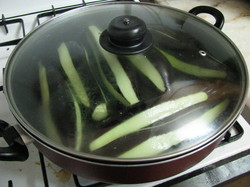 Common in the west are versions of patlıcan zeytinyağlı, ie large pieces or whole aubergines slow-cooked with plenty of olive oil and a touch of tomato.  The result is something that melts in your mouth like nothing else.  Zeliha İrez’s recipe is particularly delicious.

Of course, there is the famous imam bayıldı, a version of the above where an aubergine boat is topped with slow-cooked onions, peppers, garlic and tomatoes.  İmam bayıldı translates as ‘the priest fainted’, as this is what he is said to have done after sampling this delectable dish.  I could almost believe it.

Another national favourite is hünkar beğendi, which is succulent chunks of braised lamb on a bed of aubergine puree cooked up with a little roux and milk to make a creamy pillow for the meat.  Sometimes a little cheese is added, but I’m not yet convinced about this version. 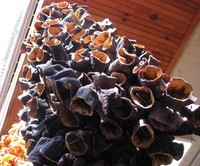 Like tomatoes, peppers and courgettes, chunks of fresh or dried aubergine are also stuffed.  In the west the filling will be the classic rice, pine nut, currant, warm spice and dill combo, whereas in the east it’s more likely to be a tomatoey rice mix with a good chilli kick.  Strings of dried aubergines, looking like wrinkled bells, can be found in markets all over Turkey, ready to be reconstituted, stuffed and cooked.

And then of course there is that wonderful candied aubergine for dessert.