The three wise women of Weinbach 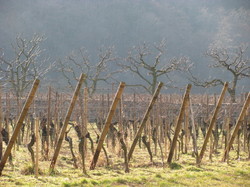 When we knocked on the heavy wooden door at Domaine Weinbach we weren’t sure we were in the right place.  Having had it recommended to us by our friend Jono at Chez Panisse in Berkeley (who knows a thing or two about wine), we were confident their wines would be good, but only if we could find them…

Having driven up and down the picturesque little Alsatian valley at least four times, we finally decided to pull into the winery despite the enormous ‘Domaine Faller’ sign and the distinct lack of inviting ‘tastings’ signs for tourists like us which are displayed prominently at so many other wineries.  And when Colette Faller peered round her front door at us, she didn’t look sure we were in the right place either.

But once we’d managed (despite our sub-O Level French) to establish we were indeed at Domaine Weinbach and convey the purpose of our visit, Colette decided we didn’t look like axe-murderers and ushered us into a small, formal, wood-panelled room.

We sat for a while, feeling like we’d horribly intruded on their private time and space.  In due course the second Faller woman appeared – Catherine, Colette’s daughter.  Catherine also seemed slightly bemused at our presence but proceeded to pour a series of five wines for us to taste with the utmost charm and grace.  By the second glass we managed to overcome our innate British awkwardness and realise what a special place we had found.

The wines, all white of course, were delicious.  If wines can be said to taste ‘sophisticated’, then these certainly are.  Elegant too – the kinds of wines you can imagine sipping blissfully on a warm, fragrant summer evening on some chateau terrace overlooking the hills. 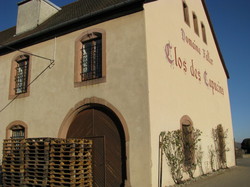 Our favourites included the Riesling Schlossberg Grand Cru ‘Inédit’ 2004, which certainly is ‘one of a kind’ with its perfect balance of fruit, oak, sweetness and minerality.  It would be fantastic with scallops.  Incidentally, the Schlossberg estate was the first to gain grand cru status in Alsace.  We also loved the Gewurztraminer Attembourg 2004, which is like a beautiful nectar of rose petals and candied citrus peel.  The pinot gris and late-harvest wines were also superb.

Between wines Catherine kept disappearing next door to attend to other more important matters.  From what we could pick up, it seemed she was in the midst of business negotiations with, we imagined, buyers, barrel suppliers or other such untouristy visitors.  But despite all this Catherine very generously gave of her time and explained which slopes each wine came from and how the family has made wines here for over 100 years.  We soaked it all up, trying to ignore nagging fears that we’d be expected to buy in the region of 600 bottles, or at least 60, rather than the 6 we had in mind… 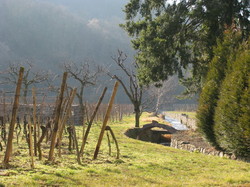 Domaine Weinbach, so named due to the little ‘bach’ (brook) that runs through its centre, has been in the family since 1898 when Catherine’s grandfather Théodore and his brother bought it.  The brothers left it to Catherine’s father, Théo, who was a prominent figure on the Alsatian wine scene.  In fact it is at least partly thanks to him that there even is an ‘Alsatian wine scene’ as Théo fought hard to help win the AOC (Appellation d’Origine Contrôllé) recognition for Alsatian wines.

But wine has been made here since much earlier days:  Vines have grown here since at least the late 9th century, and the capuchin monks who founded their monastery here in 1612 created the winery which has stood by the brook to this day.  Wine seems to be in the soil here.  If you’re wise enough to acquire a Weinbach wine, you’ll see there is still a monk on the label.

Since Théo’s death in 1979 the winery has been run by his wife, Colette, and her two daughters Catherine and Laurence, who is the current winemaker.  Like the men before them, these three formidable women have maintained Domaine Weinbach’s commitment to quality and philosophy of natural wine-making processes in harmony with the land that provides it.  The vineyards are mostly both organic and biodynamic, and only indigenous yeasts are used, so as to yield wines which fully express their terroir.  Catherine’s youngest son is in training at the winery, so it looks set to stay in the family at least another generation. 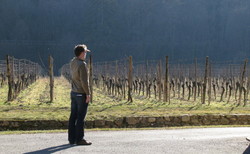 We still don’t know if Domaine Weinbach was open for tourists that day or not, but we’re very glad we plucked up the courage to knock on their door, and very grateful to the Faller matriarchs for being such gracious and generous hosts.  Their wines were by far the best we had in Alsace (and we had a few).