We ate all the pies

For most British tourists, Greece is essentially a succession of islands and beaches.  For us, it was mostly a succession of pies.  We’d had börek in Turkey, heard talk of burek in Bulgaria; but it was in Greece that the bourek really came into its own.

For one thing, we generally avoided the islands (making an exception for Crete), and spent most of our time on the mainland, where most of the food (and wine) is – and discovering quite a different Greece from the one we’d seen before.  But for another, we quickly found that Greeks don’t really go for big breakfasts.  After our twenty-three-jam feasts in Turkey, this left us with big breakfast-shaped holes, for which there was only one solution: pies.

OK, and cheese.  And spinach.  And quite a lot of weeds.  But if you try hard enough, you can get all those into pies too.  And we did … 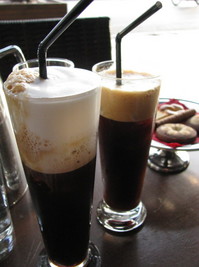 After crossing the Turkish border we sped through Thrace and eastern Macedonia quite quickly, stopping in Kavala briefly to admire the harbour and lack of breakfast, but otherwise pushing on to Thessaloniki.  Here we really felt that we were in a modern, western, commercial city again – and even more strongly, felt suddenly very old: the entire population seemed to be in their early 20s, and mainly preoccupied with staying up until very late (we never found out exactly how late, because we’re very old) in trendy harbourside bars drinking cold instant coffee.  So we threw in our lot with the old men instead, hiding out in ouzeris drinking tsipouro (and ouzo, of course), eating lots of mezedhes, and finally solving the Romanian jam conundrum.

In between pies, that is: spinachy spanakopita, cheesy tiropita, and more kinds of bourek than you’re interested in hearing about.  Although I should mention the galaktobourek, or milk pie, which we realised was very similar to Laz böreği, a speciality of the Laz people who live around Trabzon in north-eastern Turkey.  Can this be more than a coincidence, given that Trabzon was once Trebizond, the capital of the Pontic Greeks and the last output of the Byzantine Empire?  Um, I don’t know.

We also re-discovered mastic – the aromatic resin rather than the rubbery bathroom sealant – which we’d tasted on the Turkish Aegean coast (within sight of mastic’s only source, the Greek island of Chios) when we stayed with Erhan Șeker.  Erhan showed us how to use mastic in delicate fish dishes; in Thessaloniki we found out it also works with a great big spoonful of sugar.

While we were there we also took a slight detour (by plane, I have to admit – we would have caught the ferry, but there was a fuel strike) to Crete.

Here we spent our time avoiding the large numbers of tourists by attending a conference on Eastern Mediterranean cuisine, watching Turkish and Greek chefs (including Erhan)  prepare their different takes on the same basic dishes, and listening to various speakers tell us how fantastic this kind of cooking is, and how they are hoping to promote, standardize and “brand” it.  Whether this is really the right way to go about it, perhaps only time will tell; but having tasted some of the food that gets served in the beachside tourist tavernas, we could certainly understand what they were worried about.

After the conference was finished, though, we got the chance to discover a bit about the real Cretan cuisine.  First we visited Nikki Rose, who runs a wonderful sustainable agri-tourism organisation, and knows where to find proper hortapita.  Horta is a Greek phenomenon: wild greens, gathered from the countryside – or what we know as, well, “weeds”.  It’s quite entrenched in the culture (the right to gather horta being enshrined in law) and has become quite trendy in the big cities.  We’d come across it in Turkey’s (Greek-influenced) Aegean coast – but had never enjoyed it in its natural environment: the pie.

(By the way, the initial studies which convinced the world that the “Mediterranean diet” was the solution to avoiding heart attacks actually looked at the traditional Cretan diet.  So if you’re trying to cheat death that way, it’s not enough to put some olive oil on your food, you probably need to start eating weeds.  A lot of them.  And speaking Greek and being Orthodox and stuff.) 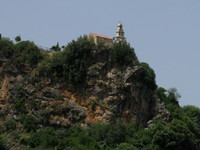 After that we spent a couple of days up in the mountains at Enagron, a sort-of-agriturismo where they make lots of nice food and distill their own booze.  And more importantly, make a lovely big breakfast including a grape syrup which they call petimezi – although even Barnaby could tell it was really pekmez.  But soon enough it was time to fly back and rejoin our car in Thessaloniki, so that we could investigate more of Macedonia.

Macedonia turned out to be lush and green, full of fruit and vines (as we discovered when visiting the Boutari winery in Naoussa), and relatively undiscovered by foreign tourists.  Although as we discovered when visiting the quite remarkable royal tombs at Vergina, the same cannot be said for Greek schoolchildren.  All of them have to visit the tombs – from the look of things, all at the same time – in order to understand just ho
w Greek (and definitely not, say, Slavic, no sir) Macedonia is.

In Naoussa we stayed at the Esperides Hotel, whose owner Dimitris is a teacher at the local cooking school.

Anna spent lots of happy time with him in the kitchen, while I went off cycling to Aristotle’s school – once where the man himself taught a young Alexander the Great, now a beautiful spot by a river surrounded by mulberry trees.  We even bumped into Alastair Sawday, whose guidebook we’d just been using to find wonderful places in Turkey.  Then we all met up by Dimitris’ big outdoor brick oven to bake (and eat) the biggest roundest pie you’ve ever seen.

From Macedonia we headed south (stopping only to learn about jam-making, and find out that Greek grannies are as knowledgeable as Romanian ones) to stay in an old silk shop on the Pelion peninsula.  Pelion is a steep rocky finger covered in little villages full of old Ottoman-style houses, connected with a maze of stone donkey tracks which lead up and down the hillsides.  At the bottom are some perfect beaches, complete with sparkling clear sea and people grilling tasty fish; at the top are the old women picking horta.

If you know how, you can find all kinds of wild food: vine leaves, nettles, thyme, fennel, amaranth and more.  But as we discovered, if you don’t know how, you can find a whole lot of nice-looking but fairly disgusting bitter weeds.  They didn’t kill us, but they didn’t make us much stronger either.  And for once, our enquiries were met with polite but stony silence: if you know where to find the good stuff, you don’t tell just anyone.

Then south, through the gates of Thermopylae, to the Peloponnese and Olympia.  Being such keen sporty types, we were really here to pay homage to the original Olympic stadium (pleasingly, it looks just like it does in the Asterix book).  But somehow, things culinary conspired to distract us once again.

It didn’t help that our hosts Suzanna and Theo had an enormous vegetable garden full of flowering courgette plants, and it certainly didn’t help that they knew the friendly local Feta makers.  So we spent most of our time in the kitchen, learning all sorts of new recipes, or in the kebab house celebrating my birthday with the whole extended family.  And the time to go and get our ferry to Italy came all too soon.

Fortunately, just as we were about to leave, we spotted a final pie opportunity.  Greece is sensibly full of cheap high-street pie shops, but most places these days use ready-made pastry and/or frozen pies.  Olympia is no exception, but there’s one place where things are different: the incredibly dedicated owner gets up at two in the morning to make his filo pastry, does everything himself including the cleaning – and still found time to tell us about his recipes and insist that we try them all!  A fitting, flaky, crispy and cheesy farewell to Greece …

You can see some of our photos from Greece here.