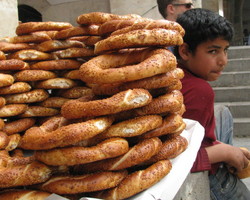 While you may well find rice or potatoes as the starch on your dinner plate, and plenty of dried beans and pulses cooked up in your stews, and even desserts, it is wheat that has to be the principal starch-provider of Turkey.  After all, it was in ancient Mesopotamia, and probably around the modern-day town of Diyarbakır in eastern Turkey, that wheat was first domesticated by man more than 10 thousand years ago.

(We did drive through Diyarbakır, although sadly without stopping, having been deterred by all the military checkpoints surrounding it, which reminded us that the city is home to the PKK headquarters, with whom the Turkish military is not best of friends.) 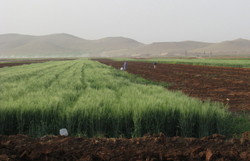 Wheat is eaten in all forms – as whole, unhusked grains, as cracked wheat and bulgur and of course as milled flours for breads, pastries and pastas.  One of our favourite dishes was the very unusual (to us at least) firik, a Syrian dish which we had in Mardin (from where we could see Syria stretching out beneath) perhaps because one of the chefs at Cercis Murat Konağı is Syrian.  It was a puree of cooked green wheat, which we later learned had been harvested while still moist, somewhat smoked and roasted while its stalks and leaves were slowly burnt, and then well-thrashed.  It was so green and smokey we thought at first it must have been some unusual wood-fire-roasted vegetable.  I never knew wheat could be so interestingly flavoured. 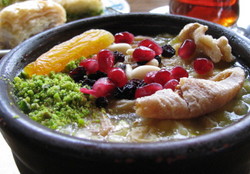 Regular whole grains appear in numerous soups, adding good texture, fibre and protein too no doubt.  Also, along with whatever other dried grains, beans and pulses that happened to be in the back of the cook’s cupboard, whole wheat grains will appear in aşure, a lightly sweetened and delicately flavoured starchy dessert found all over Turkey and beyond.  Aşure is one of those wonderful dishes eaten in various forms in many neighbouring countries, steeped in history and shrouded in legend, religion and local culture.  We came across versions of it in Romania, Turkey and Greece, and no doubt you can find it in Bulgaria, Armenia and Lebanon too, among other places.  In a nutshell, it is said to be Noah’s pudding, made with everything he had left in the boat towards the end of the flood.  I could go on for pages about this particularly interesting pudding, but I won’t.  Not here anyway. 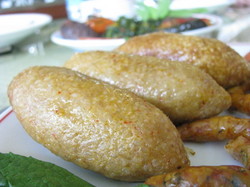 Bulgur is common too.  These irregularly shaped golden nuggets of cracked wheat (available in various sizes, each for a different set of uses, of course) have been parboiled, which makes them much quicker and easier to use than whole, raw wheat.  We found it in soups, köfte, stuffed vegetables, mixed with greens, and as a side dish, sometimes dressed with a little tomato-chilli sauce.  It’s so tasty (buttery, nutty, grainy) and so versatile, it made me wonder why I haven’t been cooking with it for years.

The spectrum of breads in Turkey is as confusing as it is mouthwatering, and seems to blend seamlessly into that of pastries, and even pastas.  It was in trying to get my head round the classification of the various leavened and unleavened breads and pastries that we came across in Turkey that I realised just how versatile flour and water can be. 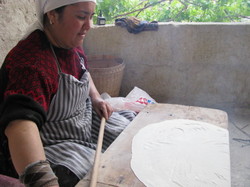 Take yufka for example, the ubiquitous paper-thin, large rounds of raw or barely cooked dough, made by big-armed women and sold in markets all over Turkey.  Fill it with some tasty mix of cheese and herbs, or whatever, fold it up and cook it on a hot metal sheet over a fire and you have gözleme.  (And very tasty they are too, especially when you make them yourself.) But then, slightly smaller, slightly fatter circles of dough, just folded in half once over their filling might also be called gözleme.  Don’t fold it and bake it instead, and you have lahmacun (like a thin-crust pizza).  Or make the dough even thinner and fold it over itself lots of times and you have katmer, which is usually savoury, but may be sweet, especially if you’re in Gaziantep. 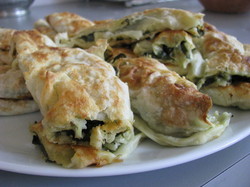 Anyway, I digress – back to yufka:  roll the yufka around a cheesy or spinachy filling and bake it, and you have börek, not gözleme.  Or just layer it.  Make the börek ever so slightly differently (with more water) and you have su böreği – practically lasagne, as the yufka layers feel and taste like pasta.  Roll the yufka even thinner, layer it with ground nuts, bake it and pour hot syrup over, and you have baklava, for which there must be 50 different names, depending on its shape.

None of these have yeast.  Neither does lavaş – thinly rolled and stretched bread baked in the oven, which may be left to dry then reconstituted with water when needed.  A bit like yufka, which the women of the cave houses of Cappadoccia used to knead, roll and bake communally every three months or so before the government moved them into modern box houses made of bricks and concrete which were not suited to communal baking or dried yufka storage. 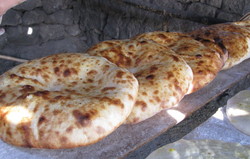 Sometimes lavaş looks surprisingly similar to pide, a yeast bread, which can be small and puffy, round and low or long and really quite thin.  At least with pide you know it’s always made with yeast and always baked.  You know where you are with pide.  More or less …