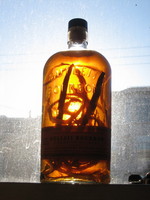 So what is whiskey?  And rye and bourbon for that matter?

A whiskey is a spirit distilled from fermented grain(s) and then aged in barrels.

They vary from place to place by blend of grains used, number of distillations, types of barrel used, ageing time and temperature, filtration method, ingredients added, and much more…

Scotch and Irish whiskey tends to be made from malted and unmalted barley, whereas American and Canadian whisky is usually made mainly from maize (corn).

Bourbon is the most prominent corn whiskey, named after a county in Kentucky which was blessed with ample corn and water in colonial times.  Bourbon is made from a ‘mash’ that is mainly maize, with some malted barley and a little rye or wheat.  It is aged in new, charred American oak barrels, which give it a deeper colour and stronger vanilla note than Scotch.  Unlike Canadian whisky, bourbon cannot be sweetened, coloured or flavoured; the only addition allowed is water.  Bourbon is particularly delicious if infused with citrus and vanilla, I think.

Rye is an American whiskey made, unsurprisingly, of at least 51% rye.  Many Canadian whiskies are also called ‘rye’, despite containing very little rye these days.  American rye whiskey tends to be drier, bitterer, more peppery, and, I think, grassier, than bourbon.  The 1794 is traditionally made with rye.

A note on spelling:  In Scotland, Wales and Canada it’s ‘whisky’; in Ireland and America it’s ‘whiskey’.  If Wales was spelt Wails (or Cymru, even), it would be easy to work out which countries use the ‘e’ and which don’t.

‘Whisky’ derives from the Gaelic word for ‘water’ (‘uisce’ or ‘uisge’), and is called in full ‘uisge-beatha’ (in Scotland) or ‘uisce beatha’ (Ireland), meaning ‘water of life’.