Louis XIV is said to have called the sweet wines of the Tokaj region of Hungary “the wine of kings, and king of wines”, and they’ve been used as diplomatic sweeteners at the highest levels for hundreds of years.  We went to find out what makes them so great, and discovered that they are still the king of wines – perhaps these days even more so than ever before.  However, they now seem to be the wines of very different kinds of kings…

The most famous wines from Tokaj are the so-called aszú dessert wines, renowned for their golden and amber hues.  These are usually made with the local furmint grape.  Some grapes are picked at the usual time, while others are purposefully left on the vine longer to become infected with ‘noble rot’, lose water and shrivel into very unappetising looking berries.  These are painstakingly hand-picked one by one (only the perfectly rotten and wrinkly ones will do), and then added to a base plonk made from the juicy berries picked earlier.  After sitting together for a while, the mixture is strained and then aged first in oak barrels and then in the bottle, for set minimum periods totalling 3 years.

The number of puttonyos displayed on the bottle indicates the quantity of botrytised aszú berries added to the wine.  A puttony is an old 25kg bucket, so ‘6 puttonyos’ (the highest-ranking type) means 6 x 25kg of mouldy grapes were added to each gönci barrel of 136 litres of basic plonk.  The more puttonyos the sweeter the end result and the more expensive the bottle (think of all that hand-picking).

But don’t go looking for a bargain-basement aszú wine – they don’t even bother making 1 and 2 puttonyos wines, and even 3 is hard to find.  We liked 4s and 5s the best, 6s being almost always too sweet.  The ones we tasted at Disznókő and Hétszőlő were outstanding – think candied citrus peels, apricots, prunes, figs and just a few raisins, yet still with a bright acidity and minerality to stop things getting too silly – perfect for foie gras, blue cheese, a sweet fruity dessert or perhaps just sitting by the fire after Christmas dinner. 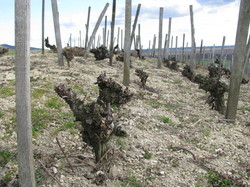 There’s also the super-rare, super-pricey eszencia and the fordítás, which between them top and tail the aszú story – eszencia being the juice which leaks naturally from a pile of picked aszú berries as they squish themselves with their own weight while waiting to be added to some plonk, and fordítás being made from the aszú wine leftovers, ie the aszú berries once strained out of the plonk.

But don’t think Tokaji wines end there.  We also tasted some delicious dry to dry-ish whites, and sweet late-harvest whites, all made (with no mouldy grapes whatsoever) from one or other of the three traditional grape varieties of the area: furmint, hárslevelű and sárgamuskotály (yellow muscat).   The late-harvests were some of my favourite of all Tokaji wines.

Most interesting were the szamorodni wines – made with a mix of pert and shrivelled berries.  The idea is that the bunches of grapes are picked as they are, containing a mix of botrytised and non-botrytised berries (and the name comes from the Polish for ‘as it comes’).  We thought they tasted a bit like sherry – woody and nutty, yet still fruity, with the odd hint of vanilla and raisin.  The drier versions might make great aperitifs with some charcuterie nibbles, and the sweet ones would be ideal for bread and butter pudding. 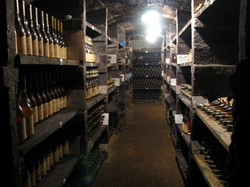 So, these golden nectars certainly seemed fit to be called ‘king’ of wines.  But it turned out that this has not always been the case.  We were told that under communist rule the vinyards and wines suffered greatly, with quality being sacrificed for the sake of quantity.  It’s taken a while to get fully back on its feet: we tasted a few remnants of the past that were distinctly ‘mushroomy’ and ‘wet doggy’ – not descriptors traditionally associated with the best Tokaji wines.

Since 1989 many of the estates and wineries have been revamped and restored to their former glories.  But who has benefitted from this rush of investment?  Both wineries we visited told us they had previously been owned by Hungarian noble familes, who had their property confiscated and nationalised by the Soviets.  But bizarrely (or so it seemed to us), data was not so accurate as to allow the return of the wineries to their previous owners after 1989.  The new owners in both cases (and in many other cases, we later discovered) are multi-million multi-national wine corporations, either barely or not at all Hungarian-owned. 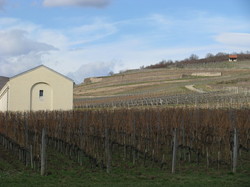 The investment is obvious – glossy marketing pamphlets, huge new buildings, top-notch wine technology mixed with ancient techniques, miles of new cellars etc.  Tokaji wine is being restored to its former golden glory, but Tokaj the region seems particularly poor by Hungarian standards.  The gold seems not to be trickling down to the people who live and work here.  For an example, take a look at Tállya, where we stayed on our second night in the region – despite being one of the 28 official villages of the UNESCO World Heritage-listed Tokaj region, it’s one of the most down-at-heel places we came across in Hungary.

This seems in contrast to many other wine regions we’ve been through on our European travels, where business is clearly being carried out at all levels, from large international producers down to small individual cellars, and with the fame of one bringing benefits to the other.  It would be a shame if this didn’t happen in Tokaj.  Foreign investment has obviously improved the quality of the wine, bringing it back to (or even exceeding) its full past glory – but if much of the profits are leaving Tokaj to go to a few foreign corporate ‘kings’, is this too high a price to pay?