This cocktail is in the Manhattan family, but much more elusive.  It seems there are only two places sophisticated enough to serve it in San Francisco, not counting our kitchen – the top notch restaurant Range and the über-cool speakeasy style bar Bourbon & Branch.  For a truly amazing cocktail experience, try it with vanilla and citrus infused bourbon instead of rye. 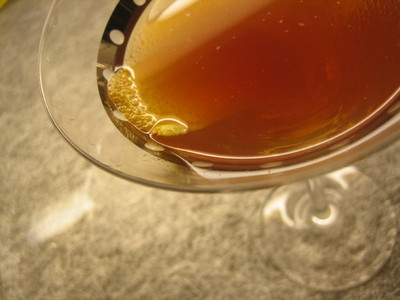 This recipe is for Tracy and David, who helped us enjoy a few last
weekend at Tim’s 21st(ish) birthday party in their super-stylish Eichler house in Orange County.  It is the result of many
a long night of intensive research conducted at some of California’s
most sophisticated bars, just for you.

The 1794 is named after the Whiskey Rebellion which came to a peak in Pennsylvania in that year.  Poor, pioneer farmers aggressively protested a whiskey tax which they felt unfairly penalised them.  They were accustomed to converting their excess grain to whiskey, which was easier to store, transport, sell and barter with.  Among many other incidents, one group of these ‘Whiskey Boys’ disguised themselves as women, assaulted a tax collector, cut off his hair, coated him with tar and feathers, and stole his horse.  The federal government, to demonstrate their power, invoked Martial Law and sent nearly 13,000 to catch the whiskey boys.  Some were arrested and few lost their lives but most protestors were never found.