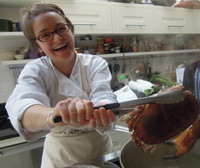 Anna Colquhoun is a cooking teacher, food consultant and writer with a fascination for the anthropology of food.  Something of a food nerd, she has travelled far to research and write about her subject.

Anna offers cooking classes in London, including popular bread-making and preserving workshops among others. Her supper club, the Secret Kitchen, is a convivial dinner at which people sit together for a surprise seasonal menu. Books include ‘Eat Slow Britain’ (Sawdays, 2010), the ‘Riverford Companion’ seasonal vegetable series (Riverford, 2015) and ‘Gather, Cook, Feast’ (Fig Tree, 2017). She is also the consultant on BBC Radio 4’s ‘The Kitchen Cabinet’, having had the original idea for the show.

Anna trained as a chef in San Francisco and at Alice Waters’ legendary restaurant Chez Panisse in Berkeley. She is currently doing research for a PhD in anthropology, focussed on the construction of regional cuisine in rural Croatian Istria, where she also runs a culinary guesthouse, Bolara 60.

“Having always loved cooking at home, I finally left my career in international development in 2006 to become a cook.  It started in San Francisco.  I trained professionally at the Tante Marie Cooking School, took more specialised courses at other schools, including the San Francisco Baking Institute, and worked as an intern at Alice Waters’ legendary restaurant Chez Panisse in Berkeley.  I fell in love with simple, seasonal cooking and making everything from scratch — sausages, pizza, pasta, preserves, you name it … There is more about my experiences in California in Abby Dyson’s interview with me.

A year travelling for culinary research deepened my understanding and love of Turkish, Italian, Spanish, Romanian, Moroccan and Senegalese cuisines, among others.  You can read more about these culinary adventures here, and find lots of recipes too.  Food’s place in history, geography, language, culture and society fascinates me; nutritional analysis and calorie-counting aren’t my thing.

My cooking classes include Moroccan and Turkish feasts, French classics, New Nordic cuisine, preserving workshops, seasonal vegetarian cooking, knife skills, bread, pastry, pasta, seafood and more.  They are always small and hands-on, ending in a convivial meal around the kitchen table.  Since early 2010 I have also been running a monthly supperclub called Secret Kitchen, which seats 20+ people at communal tables.

I support sustainable agriculture, animal welfare and fair trade and only use the best quality ingredients in my cooking classes, usually sourced from Riverford Organic, Hubbub and my fantastic local butcher, greengrocer, fishmonger and cheesemonger in Highbury.

I had the idea for BBC Radio 4’s The Kitchen Cabinet and am food consultant for the show.  Each week the programme travels round the country to meet local food-loving people who pose culinary questions to a panel of experts chaired by restaurant critic Jay Rayner.  You can download the podcasts here and read a behind-the-scenes report of the first recording in Suffolk here.

I collaborate often with Riverford Organic Vegetables and am their ‘preserving guru’ – running cooking classes, developing recipe kits and writing for their blog. I also help write Riverford’s fantastic cookbooks.

I returned to university to study the anthropology of food part-time at the School of Oriental and African Studies – a course I would recommend to anyone seriously interested in food all the way from field to fork, and all it can tell us about society here in the UK and globally.  I am delighted to have returned to anthropology 20 years on from my first anthropology degree and have now embarked on a PhD project to research the construction of a regional cuisine in Croatian Istria…”

Why the ‘culinary anthropologist’?

Matt eats very well.  He is also a computational linguist who takes time off from the research he usually does for culinary road trips and other adventures.  He has contributed much to this website.

Barnaby is our culinary bear.