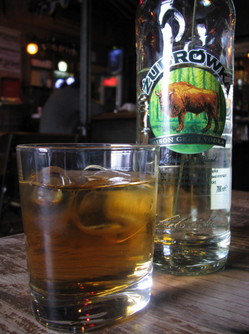 The combination of Żubrówka and apple juice is a popular Polish tipple.  (Or of course, you can omit the apple juice.)

Żubrówka (aka bison grass vodka), made in Poland since the 16th century or earlier, is said to boost manliness, stamina and sexual drive.  This is because it’s infused with the grass which the bison of Białowieża forest in Poland love to eat.   These ancient bison are so fond of this special grass that attempts to transplant them to other parts of Europe have failed due to the absence of the grass.  Every bottle of Żubrówka contains one stem of the grass.

This recipe comes courtesy of Richard Abel, our friend in Zakopane, Poland.  Richard welcomed us to Poland with several rounds of apple pies…

Serves:  everyone
Time:  hardly any