As happy as a cow in Viviers-sur-Artaut 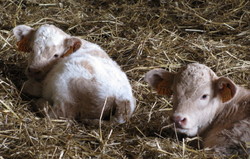 This week, while the US government was recalling the largest ever amount of commercial beef (apparently, cows from the Westland/Hallmark Meat Co so sick they couldn’t walk properly have still been ending up in diners’ Happy Meals), we were playing with Farmer Cornet’s very happy baby cows on his farm in Viviers-sur-Artaut.

One of his cows had just given birth to twins, one of whom Michel was bottle-feeding twice a day himself as the mother would only feed one.  (Nature can be cruel too, let’s not forget.)  The twins were having some trouble using their legs, but then they were only 5 days old.  All their older relatives were walking around happy as can be, probably because Michel gives care and attention to each and every one. 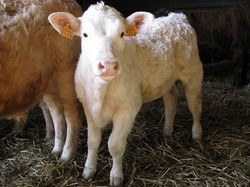 Michel Cornet and his wife Francine run a small farm and B&B in the Champagne region of France.  Michel is from a family of farmers who have worked the land in the region for many years.  While the Cornets’ neighbours grow grapes, he sticks to veal farming.  His Charolais and Salers cows spend the summer roaming the meadows and the winter in the barn being fed hay Michel has collected and stored for them.  They seemed pretty content with life.

Life for one of the Cornets’ cows may only be around 8 months, but it is a happy one.  For 700 Euros Michel can sell a young cow on the local market.  He only has around 20 cows in total, (and in fact gets somewhat attached to the young ones) but together with their chambres d’hôtes income, this supports the family.  Farming isn’t all about the commercial aspects for them, though – they try hard to produce everything they need, including chickens, vegetables and a couple of pigs.

In fact, Michel also grows some grapes, to fuel a merry little aperitif production line – ‘ratafia’ – a delicious combination of grape juice and ‘fine de champagne’ (basically, distilled champagne).  He’s tried making wine in the past, but hasn’t really got on with it – whereas with ratafia he’s clearly found his calling: while other people in the village make ratafia too, as he proudly (and as far as we could tell, justifiably) says, “Mon ratafia est le mieux.”  Michel’s ratafia is not for sale, so you will have to go and stay with them to try some of the 200+ litres they get through a year.

And it’s worth a visit for Francine’s cooking.  We feasted on ‘oeufs meurettes’ (a typically Burgundian dish of eggs poached in red wine and served with a red wine sauce garnished with lardons), roast pork loin with potatoes and cauliflower and ‘îles flottantes’ (poached meringues with creme anglaise and caramel).  Breakfast was just as good, including a freshly baked ‘galette au sucre’, a northern French treat for which Francine agreed to hand over her recipe. 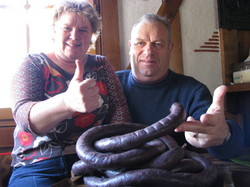 Almost all of what we ate at La Combernée had come from the farm, including the pork.  We didn’t get to meet Gui-Gui as he died the day before we arrived.  But we did get to try the delicious ‘boudin noir’ provided by his intestines, blood and fat, safe in the knowledge that every bit of him had been put to good use and hadn’t travelled more than a mile to the table.

We would highly recommend staying with the Cornets – a welcoming and warm family, who know what really makes a Happy Meal!