The Vietnamese adopted the baguette from their French colonists and put it to very good use in these delicious ‘Saigon sandwiches’.  This is the perfect way to use up leftover roast meats, especially pork, and ideally Chinese BBQ-style char siu pork.  This recipe fuses techniques from Andrea Nguyen’s book ‘Into the Vietnamese Kitchen’ with inspiration from Saigon Sandwich*, by far the best hole-in-the-wall bánh mì purveyor in all of San Francisco. 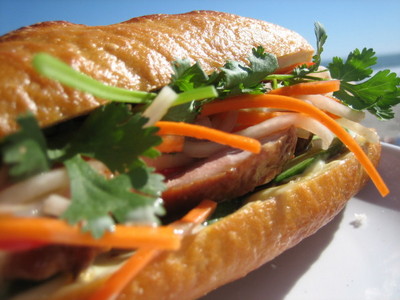 Serves:  as many as you have ingredients for

You will also need:
crusty baguette rolls, or 6” lengths of a wide baguette
mayonnaise*
Maggi Seasoning Sauce* (or Marmite mixed with water so just pourable)
cucumber (English), sliced into rounds on the angle

* Saigon Sandwich’s bánh mì are not only twice as nice as those sold out the back of The Slanted Door (supposedly, but not, San Francisco’s best Vietnamese restaurant), but also half the price.  Buy one every time you happen to be on Larkin just south of Eddy.

* Instead of this salad you can use the Vietnamese carrot and daikon salad described in my separate recipe.  This has wonderful additional lime, fish sauce, chilli, garlic and shallot flavours but somehow tastes less authentic in bánh mì than this simpler, sweeter pickled version of the salad.

* The sandwich tastes even better with home-made mayonnaise:  Bring an egg to room temperature.  Crack it into a food processor and dollop ½ tsp Dijon mustard, a squeeze of lemon juice and a good pinch of both salt and pepper onto the yolk.  Process til blended, then, with motor running, pour in, very slowly at first, 300ml (1¼cups) of a mixture of half olive oil half vegetable oil.  Process until all oil is absorbed and emulsified.  Taste and add more lemon, salt or pepper if desired.  If too thick, mix in a little water.

* Like its British cousin Marmite, Maggi seasoning sauce is intensely savoury and meaty, despite being made entirely from vegetable proteins.  (Just this once, I advise you not to read the ingredients list on the label…)  Invented in Switzerland at the end of the 19th century, it was probably brought to Vietnam by the French.  The kind in a small long-necked bottle made by Nestlé (everyone’s favourite powdered drinks manufacturer) is unfortunately much better than the non-Nestlé imitations, so I’m told.