Beer from the Middle Ages 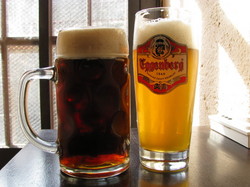 The Czechs certainly like their beer – in fact, they drink more of it than anyone else. One of the world’s best-known beer styles, pilsner, is named after the Czech town of Plzeň; and the name of one of the most famous brands (deservedly or not) derives from the brewing centre of České Budějovice (or as the Germans call it, Budweis).

They’ve also been brewing it for a very long time.  In Český Krumlov, they’ve been brewing since at least the 1300s, with records showing they were granted a charter to brew and sell beer in 1336.  And at the Eggenberg brewery, they still make beer the same way – local organic ingredients, secret recipe and all – producing a rich, tasty, slightly yeasty brew known for its dramatic effects on the youthful appearance of the local womenfolk and on the digestive systems of tourists.

They actually make beer in two entirely separate ways at Eggenberg.  One hall is full of shiny towering steel vats, fully computerised and controlled by just one person.  Here they make beer the modern way, using cultured yeast, and filtering and pasteurizing the results.  And it’s popular stuff – they put out 5 million litres of it per year. 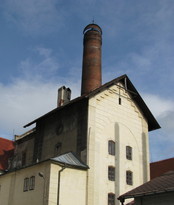 But in the next building, they’re still following the methods and recipes exactly as they did in the Middle Ages.  All of the ingredients come from nearby: the water comes from their own well in the courtyard; the hops are grown in fields just outside town; and they produce their own malt by sprouting barley in the upstairs room (while carefully controlling the humidity in the time-honoured way by opening and
closing the window). 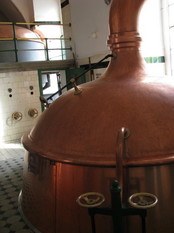 Of course, it’s a much more labour-intensive process – 60 people work in this part of the brewery.  The beer has to move between four separate copper tanks in stages: first the malt must be mixed with water, then cooked to form a mash; next the liquid wort is pumped off (leaving the rest of the mash to be used as animal feed); then it can be mixed with the hops and boiled, and only then is it suitable to start fermentation.  (Well, after some other secret ingredients have been added too – but for some reason we couldn’t find out much about them).

But of course, all this has to be done by hand, including pumping 30,000 litres at a time between tanks – and even more arduously, the brewmaster has to taste it every 2 hours.  Perhaps because it takes so many people to do all this hard work, it’s become traditional for local men to take jobs in the brewery before getting married – it shows they’re capable of looking after a home. 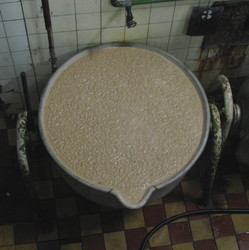 Once the liquid is ready, it moves down to the cellars for fermentation.  And even here there’s no concession to modernity: while most breweries use industrial yeasts, here they rely on the natural microbes that have been living on the cellar walls and ceilings for hundreds of years.  The brewmaster harvests some of this natural yeast and mixes it with cold water, letting it sit until it produces a brown, frothy gloop – and this is then all that is added to begin the fermentation process, which goes on in large square tanks here in the cellar for 10 to 12 days.

At this stage, we finally have something that’s alcoholic and can really be called beer.  It’s drinkable, and this is how people in the Middle Ages would have drunk it.  Local tradition even encourages swimming in it if you want to keep your youthful good looks.  The brewery staff can drink it this way, too – but for people whose stomachs aren’t used to the natural microbes and yeast, drinking it can produce some unpleasant effects.  You can taste it (and we did – very good indeed), but it’s probably wiser not to follow the example of a group of Bavarian beer experts who visited last year and insisted on trying a full glass each – then having to schedule significant unplanned time in the toilets. 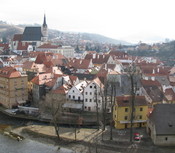 For the rest of us, the beer then moves into the next cellar where it’s stored for several days in tanks while the yeast sinks to the bottom.  After that it’s sold to the general public in the brewery pub – it still has some slight cloudy sediment (and they sell it under the name “yeast beer”), but tastes excellent, slightly sweet and full-bodied.  It doesn’t keep for very long, though, as it’s not pasteurized or full of preservatives (2-3 months at most), so they don’t make large amounts except when they get an order. 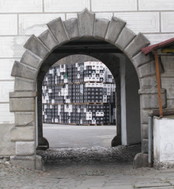 Incidentally, as the yeast sediment is entirely natural, it can be discharged straight out to the river (the Vltava must be full of very happy fish) – something that can’t be done with the chemical yeast used in the modern part of the brewery.

Of course, you could just drink the modern filtered version – it’s pretty good, and manages to keep the sweetness and full body of the original quite well.  And it’s much easier to buy.  But if you find yourself in Český Krumlov, try to get your hands on the real thing – it’s the only way to get the full natural goodness of cellar mould.