And the nominations are … 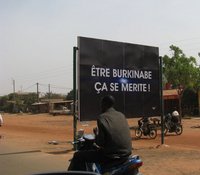 Ten minutes into Burkina Faso, and we knew it was going to be a dead cert for that most coveted of awards: Most Friendly Border Guards Anywhere Ever. The Malians will be disappointed, I know, after a very strong showing indeed, but the Burkinabés trumped them from their very first “Bienvenue!“. This is the way to welcome new arrivals to your country — friendly, enthusiastic, helpful, interested and generally very correct. UK Customs and Immigration could certainly stand to learn a thing or two … 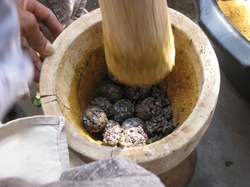 And now that we’ve spent a (too too short) while here, that’s not the only award it’s been nominated for. It’s up for the hotly contested Chef Most Generous With His Time prize, is the bookie’s favourite for Most Surprising Yoghurt-Offal Combination, has several entries in the extremely competitive Tastiest Street Food category, and is way out in the lead in the (admittedly less competitive) Most Impressive Cross-Town Inter-Generational Search For An Obscure 70s Funk Album.

Let’s open those envelopes, and find out just what they won …

We said goodbye to the border, gave our empty plastic bottles to the friendly Peulh lady (complete with mouth tattoo) who needed them for her milk, and headed in. The fields were full of cotton — not something we’d seen until now — and we had lots of fun with the guys weighing their bales.

Soon we arrived in Bobo-Dioulasso: big enough to have excellent music venues (we spent lots of time at Les Bambous) and even to be able to find a cab home afterwards; small enough for that cab to need a push start and have its door held on by a piece of string. Big enough to have an enormous food market, too, where we spent happy hours bargaining for soumbala (don’t let the lady pass you off with the stuff from under the counter, however much she smiles).

And big enough to have great street food. First there’s the poulet rabilet – chicken or guinea fowl with soumbala and millet beer. And something else – but it’s a secret, apparently. Next, the porc au four – Muslim, but nothing if not practical, the Burkinabés have created the best roast pork sandwich this side of Vietnam’s bánh mì. And then there’s the chicken in a bag. 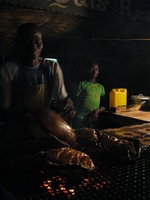 After about two hours in Bobo, we were already sitting comfortably in a maquis (Le Perroquet Bleu, I think) by the road, drinking our first Brakina beers and watching Pascal grill our dinner in his big steel brazier. Chicken with soumbala – in a cement bag. The bag’s thick enough not to catch fire in the flames, and thick enough to seal in the juicy spicy flavours. Forget sous vide, if Heston Blumenthal knew about cement bags he’d be cooking his chicken this way, I assure you. 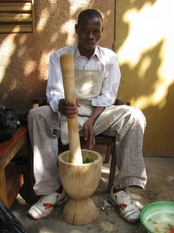 But I suspect Heston wouldn’t be quite as happy to show you how it’s done. We asked Pascal what was in it; not only did he tell us, he offered to show us, and a couple of days later we met up for a whole shopping-cooking-and-eating lesson — from buying the chicken (live, of course – no point getting stale dead chicken) and getting it plucked, to sourcing and pounding the spices, to cooking the whole affair in his courtyard on his gas burner. It was an amazing experience, and we hope we’ll meet again – with any luck, when he’s in charge of
his dream restaurant.

We knew one more thing about Bobo-Dioulasso: back in the 1970s, it was the home of Bozambo, and we’d promised to try and track down some rare groove for Al. We made some enquiries (in other words, asked anyone we could find), but it seemed to be as rare here as it is anywhere. “Nobody listens to that old stuff any more.” But then we met someone who knew someone who knew someone whose uncle hung out with Bozambo back in the day. Apparently. Perhaps he could help? Perhaps he was just trying to sound helpful? Perhaps he just wanted us to think he could help?

After several taxis to different parts of town, a lot of waiting around, and several glasses of tea, we were starting to doubt him. But we’d underestimated his power to mobilise the neighbourhood. People started waving at us from across the street: they’d tracked down their parents’ old records. And then one by one, they started turning up at his place with boxes. 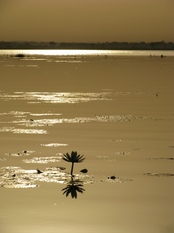 And sure enough, we eventually found ourselves in front of exactly what we were looking for: Bozambo’s first album. In the original cover. Covered in dust. And scratched beyond any chance of playability.

Oh well, we’d all enjoyed the chase, and we bought lots of other great (and some not so great) old classics. And we did get to meet the famous uncle: surrounded by stacks of 70s stereo equipment, complete in crushed velour tracksuit and looking like someone who’d lived the dream playing football with Bob Marley. 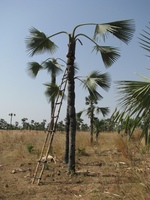 And roniers mean only one thing: palm wine. Solo at the Farafina campement organised for us to learn how palm wine is made (paradoxically, if you want to avoid getting too pissed you need to get stuck into it early in the morning before it ferments too much), and then Awa taught us how to make tasty deep fried beignets and cunning upside-down pois-de-terre cake.

Then Anna’s birthday found us spanning the whole Burkina spectrum: from hippos at dawn and palm wine for breakfast, to steak and Château Margaux for dinner — French influence certainly has its bonuses. Especially in the shape of M Leclerc, the French owner of the Canne à Sucre in Banfora: as well as the Margaux, he makes his own excellent rum and was generous enough to give us some of his delicious wild poivre de Malaguette and a jar of his mother-in-law’s homemade beurre de karité.

On to Gaoua, pausing only to give a lift to a distressed meat seller — with 100 kilograms of beef — he’d been knocked off his scooter by a team of women armed with heavy laundry baskets. (This got us a free kebab when we got to Gaoua — the day before, taking a village woman to market had got us an enormous fresh papaya, which I’m sure she’d been intending to sell. People here are nothing if not generous).

Gaoua is surrounded by the villages of the fascinating Lobi people: as well as being sincerely animist (rather like the Dogon we’d met back in Mali), they have an unusual polygamous system with matriarchal inheritance, and (in common with lots of people round here) intense initiation rituals. But we’d come here to learn more about their food, of course.

And thanks to our Lobi guides Boubacar and Hippolyte we did: they went to lots of trouble to introduce us to families who actually took us into their houses to show us how to make their tô and teach us all about the vital pot of tamarind water: it’s used in everything, and symbolises marriage to the extent that divorce involves breaking the pot. And to crown it all, Hippolyte even took us down the pub. 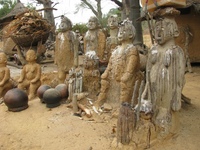 Getting from there to Leo involved a long drive through the countryside, and at this point we realised that the complex initiation rituals we’d heard of weren’t just a thing of the past. It was initiation season, and every so often we’d go past groups of teenagers walking into or out of the trees, covered in white paint, or women disguised as skeletons and covered in necklaces made of shells. We were quite glad to get to Leo and tuck into some quality tô.

After that, Ouagadougou brought us right back to urban reality: music, scooters, Thomas Sankara DVDs, and yoghurt. After a distinct lack of dairy products throughout most of West Africa, we were enjoying the Burkinabé enthusiasm for yoghurt. Yoghurt with liver, yoghurt with brains … like it or not, it’s not just for breakfast any more.

We spent a very pleasant few days in extended cross-town bargaining sessions for recipe books, renewing our acquaintance with the music (and beer) in the Jardin de l’Amitié, and generally enjoying one of West Africa’s most pleasant cities. We’d have been there for longer, but it was time to head for Ghana – we had a date with Lamisi to learn how to make bankupefish!

So, a quick drive down the road, stopping only for the obligatory 3′-tall addition to Anna’s pestle & mortar collection, then speeding up through the famous bandit ambush spot, and we said a sad goodbye to Burkina. It’s only a few hours from Ouaga to the Ghanaian border – little did we realise how different things
would be on the other side …