Carnitas was the last dish I cooked here in San Francisco.  It’s
Mexican, porky and delicious, and was therefore a very fitting final
dinner in our apartment.  It’s a Mexican classic and one I’d had many times at local taquerias.  You can find all sorts of recipes for carnitas, involving different meats, flavourings and cooking methods.  This pork ‘n’ lard version is the real deal.  My method follows that of the chef at Mexico DF restaurant, who shared it after we’d devoured several pounds of the stuff.  It is meltingly tender on the inside, crispy on the outside and wonderfully porky.  You will be in pig heaven. 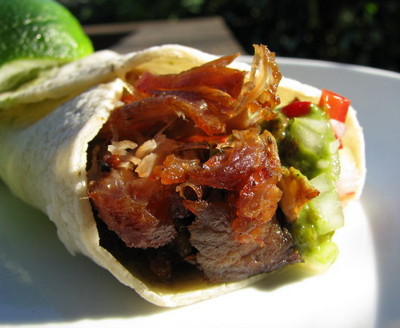 Since the carnitas-fest we have been desperately trying to
get round all the Bay Area restaurants we wanted to try, while packing up all our
stuff.
I now sit in a beautifully clean and empty flat, with a whole hour to go
until we leave for the airport.  Never before have we been so timely and
organised before catching a plane.

This one’s for Tamar, Raquel, Megan, Carri and Will, who actually gave
us money for our furniture.  Tamar liked it so much she decided it would
be easier just to move in when we leave.

To serve:
8 fresh corn tortillas (the slightly smaller, fatter ones are nice)
sour cream
a selection of salsas, such as:
tomato, onion, lime and red chilli salsa, and/or
roasted tomatillo, coriander (cilantro) and green chilli salsa, and/or
tinned chipotle chillies in adobo sauce, and/or
guacamole 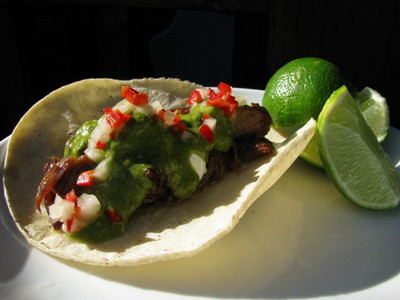