Down through the desert 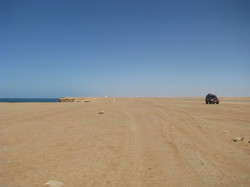 Now that we’d come down from the Anti Atlas, we were looking at a thousand kilometres of very flat, very dry country between us and Senegal.  We were on the edge of the Sahara.  Only the edge, mind you – we’re not stupid enough to drive through the middle.  And how dry can it really be when you’re right next to the Atlantic?

Quite dry, as it turned out.  And quite flat, for most of it.  But that doesn’t mean there was nothing interesting to eat, of course.  If you’re in the desert, by the ocean, presumably people will be eating camel, and oysters.  Stands to reason.  The fermented sea slugs were more of a surprise …

We stopped in Mirleft to enjoy a quick meatball tagine, and at Ksar Tafnidilt near Tan Tan to enjoy the feeling of really being in the desert – by nearly getting stuck in a few inches of sand on the track from the main road, we neatly continued our record of flawed four-wheel-driving while convincing ourselves that we were really in the middle of nowhere.

We also realised we were now definitely on the overlander trail, as we were suddenly meeting people in very large vehicles who knew more about crossing deserts than we did – a shock after being on our own in the mountains, but very useful as we got handy tips from the Kruska family and a lovely cup of tea from Kate and Oz.  After that, the roadblocks started, the diesel suddenly got ridiculously cheap, and we realised we were in Western Sahara.  A quick spiced coffee by the roadside and we were on our way south.

We only spent a night in Laâyoune, although it seemed like somewhere we could have spent longer – busy enough to be interesting (if a bit full of UN trucks), but quite relaxed and with a few women actually in cafés!  In public!

But instead we carried on further south, through the brand-new purpose-built villages that are being put up by the Moroccan government (in an attempt, as with the duty-free fuel, to Moroccanise the territory ahead of a possible referendum, cynics might say – we couldn’t possibly comment) to Dakhla.

Dakhla might not be a traditionally pretty town, but what it lacks in architecture it makes up for in location: on a long thin, sandy peninsula jutting into the Atlantic, linked to the mainland by sparkling sand dunes.  Back in Tangier, Maggie had told us you could find excellent seafood here due to the cold sea currents, and indeed so:

in fact, it has surely the only oyster farm in the Sahara, producing specimens (as we can attest) of high quality.  There’s good octopus around, too, and given the Spanish colonial history here it takes the delicious form of pulpo gallego.  And this being the edge of the desert, there’s camel, which turned out to be very tasty – although Barnaby didn’t approve.  So it ended up being a very pleasant place to hang out for a few days, admiring the Saharawi people’s flowing robes, and the Swedish tourists’ rather surreal big pink buses. 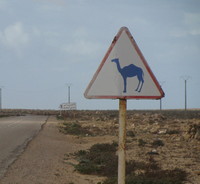 After Dakhla there aren’t any proper towns before the Mauritanian border, but still several hundred kilometres to go.  As the border crossing can take a while, it was either a case of getting up at dawn, or finding somewhere else to stay on the way – so that night we found ourselves rolling up at the not-entirely-built Motel Barbas, still 70km on the Moroccan side.  This gave us a chance to get lots of good advice from our host Fall, meet Gert and Veerle, and celebrate the US election result by getting rid of our left-over palo cortado sherry before entering the alcohol-free Islamic Republic of Mauritania.

This border crossing has a fearsome reputation amongst travellers, and the Moroccan side threatenend to confirm it: lots of mysterious offices to go to, veiled enquiries as to whether we had any spare goodies we wanted to get rid of, and the whole process taking hours in the hot sun.  What on earth would the Mauritanian side be like?

Pretty lovely, as it turned out.  The gendarmes just wanted a friendly chat about Arabic, and the police sped us through, with the only delay being waiting for the tea to brew so they could give us our first taste of the Mauritanian version. 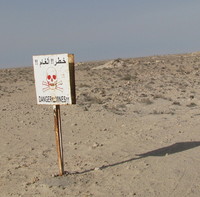 Customs were a bit previous, asking for money to stamp our car documentation, but were good-humoured enough to admit with a smile that we really didn’t need to pay it.

Of course, before finding that out, we had to drive through the infamous minefield between the two border posts.  This is a bit tricky, as the track can be quite hard to see (thanks Gert and Veerle for bravely going first!), but it’s hard to believe that it’s really as dangerous as everyone makes out. 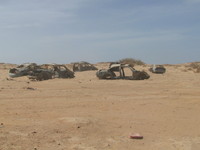 For one thing, the stories that the way is lined with the remains of mined cars which have strayed slightly off-track are surely exaggerated: there are lots of old wrecked cars, but clearly not blown up by mines – more like dumped.

Anyway, then we were through and heading for Nouakchott on the brand-new, spotless tarmac road through beautiful fields of dunes.  It’s a long way (400km or so), but the road’s so good we made it to Nouakchott not long after sunset.  We had to stop a lot, of course – partly to take photographs, but also because no road in Mauritania is complete without roadblocks.

It’s quite a militarised country, and there are constant police, customs and gendarmerie checks – we went through about 20 in a couple of days on the road.  But despite all the dire warnings we’d heard, they were all straightforward.  A few moody looks and hopeful requests for “cadeaux“, sure, but nothing beyond that; and the majority had been very friendly and often quite fun (especially the police – customs could be a bit less engaging).

And the same seemed to be true of the country in general.  Not many tourists are coming here, and we had been put off ourselves, partly due to FCO warnings, partly the much-reported fact that some tourists were killed in 2007, but more by the fact there had been a coup d’état a couple of months before.  (We also didn’t think it would be quite as culinarily exciting as Morocco or Senegal – sorry if we got that wrong).  Interestingly, in Mauritania itself, people were aware that the 2007 shootings were putting people off, but didn’t really see the coup as an issue – presumably because nobody had really noticed any difference in the country. 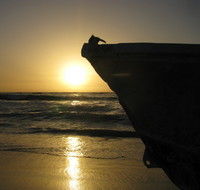 But the closer we got, and the more people we talked to, we realised that there really wasn’t any more to worry about here than in any other country.  And Nouakchott confirmed that.  The people were friendly (try walking around London and see how many people say hello, ask how you are, or offer you a lift because it’s a bit hot to be out walking).

The little restaurants all had their charcoal grills going outside.  Most of the town gathered behind the sand dunes by the beach to play music and race cars and motorbikes after dark on Friday night.  In other words, it felt like a real, normal place full of real, normal people.  We were sorry we had so little time to spend here.

Especially when we went to the beach.  For starters, it’s a fascinating place to watch people – men and women interacting much more than we’d seen in Morocco, and increasing numbers of colourful West African dresses and headscarves.  But the real high point is the fishing village: crammed with people, donkeys and piles of squid, with rows and rows of beautifully painted pirogues waiting to go out to sea.

Two things in particular awoke our interest: first, everyone here is black (rather than the lighter-skinned Moors who make up most of the population); and second, a lot of the fishing was for a strange shellfish we’d never seen before.

It turns out that almost all the fishing here is done by Lebu people – an ethnic group from Senegal who are fishermen by tradition.  And this means they like to fish for everyone’s favourite Senegalese treat, the fermented sea slug or yeet.  More (much more) on this later.

By the time we got to Diama – along 100km of bumpy dusty piste through the beautiful bird-filled wetlands of the Senegal river and the Diawling national park – we felt thoroughly at home in Mauritania, and were making plans to come back soon to see the country properly.

(For one thing, we were sure we recognised some of these birds from back in the Danube Delta).  But then at the border the police had a good try at blowing all that – unfriendly, aggressive, they wanted money and they knew they could get it (and then just stick it with the rest of the wad in their shirt pocket).  The customs were much nicer – they wanted money too, and having seen the state of their “office” I can’t say I blame them – but at least they were pleasant about it.  Oh well, we’d come this far, so we paid up and rolled the car over the dam to Senegal.  Surely the police here would be nicer?