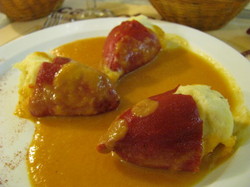 With our tummies full of ducks and snails, we moved on to Barcelona, where Pedro and Arantxa took us to what must be one of the city’s best neighbourhood restaurants – Cal Boter, in Gràcia – luckily unknown to the hordes of tourists down by the seafront.  Here we sampled more Catalunyan specialities, including one of their classic ‘surf ‘n’ turf’ dishes – this time wild mushrooms with prawns.  And we had bacalao – salted and dried cod – about which I suspect you could write a thesis as it appears in all sorts of countries, is used in all sorts of ways, and reflects all sorts of interesting historical connections…

But for now lets just say it’s delicious stuffed inside piquillo peppers.  It’s also delicious in croquetas (as I learned how to make with the chefs at Donamariako Benta in the Basque Country); and in cuarenda, the salt cod, spinach and chickpea Lenten stew (kindly taught to me by Elia’s vivacious aunt Mariajo in Castille).

There are numerous Spanish recipes involving dried bacalao – it has been loved all over Spain since at least the Middle Ages and is often associated with Lent and Easter.  Even earlier it was known by the Phoenicians, Vikings and Arabs, among others.  Note that before use it must first be soaked in several changes of cold water for 24 hours or so. 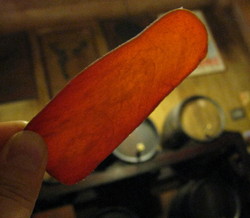 And while we were on a preserved fish roll, we also tried and loved mojama – slices of cured tuna that look like panes of stained glass window when held up to the light.  Its deep salty savouriness, chewy texture and hint of sweetness can fool you into thinking you’re eating ham.  There’s only a hint of fishiness.  Like jamón, it pairs wonderfully with dry, salty fino sherry and some toasted almonds.

Most mojama comes from Spain’s southwest coast, where the climate is hot, dry and windy, that is to say perfect for salting and air-drying fish.  Mojama is perhaps of Moorish origin, the name coming from the Arabic ‘musama’, and the practice of tuna fishing having been perfected by the Moors, who erected tuna shoal look-out towers along Andalucia’s Atlantic coast.

Read about other tastes of Spain…