Thank you so much for all the votes.  The rhubarb was the clear winner,
with the broad bean tagliatelle and chive butter chops in joint second
place, so you might get them another day.  These canapes look much too
pretty and taste much too good to only take half an hour to make.  I
hope you like them too. 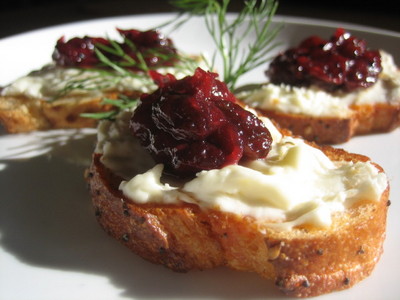 The recipe is adapted from one I learnt while assisting a class at the Tante Marie Cooking School.  It’s originally from Bon Appétit magazine.  I’ve tried it with all sorts of dried and fresh fruits, and each way works well.  If you want it to taste predominantly of rhubarb, just make sure there is much more of this than any other fruit.  Using a combination of cherries or cranberries (dried or fresh) and rhubarb produces a bright red chutney which looks great on the white cheese.  You can also try different liqueurs and spirits, eg brandy.  I think it works well with a creamy cheese with enough flavour not to be totally dominated by the intensely flavoured chutney.  A stinking, oozing washed rind cheese makes a fantastic pairing, but I realise that’s not everyone’s cup of tea.

So… my news this week goes roughly like this:

1) I have just resigned from my job as UK programme director for LCD (an
international education development agency), where I worked for 10
years, which feels very odd but is a fantastic opportunity to drink lots
of champagne.

2) I shall now be pursuing a rather dramatic career change, in the
direction of food, cooking, education and the like, which feels a bit
odd, but is a great opportunity to drink lots of champagne.

I will miss working with my old colleagues immensely, but insist that
they all come round for dinner once I’m back in London.  They can rest
assured nobody will have to take minutes. 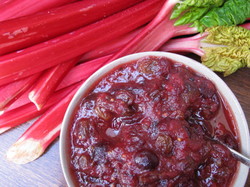