It has been brought to my attention that Spring has not yet arrived in
the UK, so any fancy ideas I have for using the Bay Area’s new array of
fruits and vegetables will largely fall on deaf ears over there for the
next few weeks.  So, a hearty stew.  I keep making this in enormous
batches and reheating some whenever it’s chilly in the flat, which is
most nights.  My very knowledgeable friend Victoria recommends drinking
a Chilean carmenere with goulash, as it smells a little like red peppers
and paprika.  Let me know if you try it out… 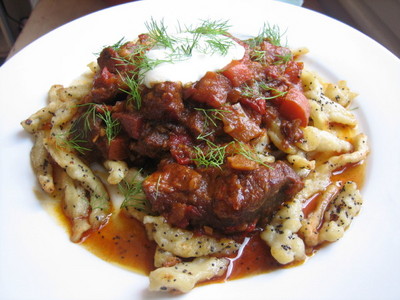 This recipe is an adaptation of one by Bruce Aidells, a formidable Bay Area sausage-maker and cookbook writer who knows more than a thing or two about meat.  He came into school to demonstrate cutting up a pig, which we then cooked in various ways, trotters and all.

One of the changes I made to his recipe is the use of a whole bottle of wine rather than a combination of a little beer or wine and stock.  This was purely for practical reasons – I’m more likely to have wine in the house than stock – and works beautifully.  Hungarians are very proud of their wine-making tradition, so it also seems appropriate.  I also added the fennel and lemon.  Like all good stews, this one tastes even better the next day, and freezes well.

Many goulash recipes out there call for beef instead of pork, which I simply can’t understand – the porkiness seems essential to me.  However, as we were to discover when travelling in Hungary, beef IS more traditional, and this recipe is perhaps more of a pörkölt or paprikás than a true gulyás – Hungarian stew classification is rather complicated to the outsider.

The name comes from ‘gulyás’, Hungarian for herdsman, and originally referred to their process of cooking tough cuts of meat in a cauldron suspended over an outdoor fire for hours and hours, then leaving the meat to dry in the sun for later use.  This developed into a soupy stew, which was popularised in the 19th century when Hungarians highlighted aspects of their culture to assert their national identity and independence from the Austrian Habsburg dynasty.  ‘Gulyás’ has always referred to something closer to a soup than a stew.  This recipe is really for ‘pörkölt’ – a braise.

Debates rage over what makes a goulash a true goulash.  Beef or pork?  Tomatoes or none?  Beer, wine or stock?  Red or green bell peppers?  Sauerkraut, potatoes or neither?  Sour cream?  It seems to depend on where exactly in Central or Eastern Europe your great-grandmother lived.  I’ve given up trying to be authentic and have used what tastes good to me.

Even paprika, Hungary’s most famous export, isn’t an uncontested ingredient in the traditional goulash.  Peppers are of course not indigenous to the region.  Paprika is believed to have come from the Americas via Portuguese traders, who sold it to the Turks, who introduced it across their empire around the 17th century.  By 1900 it had become the dominant seasoning used in Hungarian kitchens.  Today, Hungary produces around 10,000 tonnes of the stuff each year (made from a staggering 60,000 tonnes of fresh peppers), and exports over half of it.  It’s sold in at least eight different varieties, ranging from sweet and mild (bright red in colour) to super-hot (paler, and closer to browny orange than red).