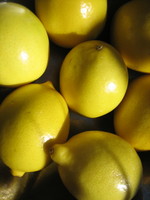 The lemon seems to be such a common, and essential, fruit, that you’d imagine it had been around since the beginning of time.  Not so.  The original three citrus plants, from which all others have been bred, are the citron, the mandarin and the pummelo.  The lemon is probably a multi-step hybrid, involving the citron, the lime and the pummelo.  Lemons arrived in Europe 1500-2000 years ago, having originated in what is now Pakistan and India, and coming via the Middle East.

Preserved lemons are actually preserved not only by virtue of the salt and acidic lemon juice that surrounds them, but also by fermentation.  Natural yeasts on the lemons flourish in these salty, acidic conditions and suppress other microbes that would otherwise spoil the lemons.  They do this by consuming the fruit’s sugars and producing carbon dioxide, acids and alcohol, which help protect the lemons from spoiling by deterring nasty bacteria and favouring friendly bacteria.  You’ll be pleased to know that they don’t touch the vitamin C – it’s left for you.  The salt solution should be 5-10% to create optimum conditions.  The result is an unusual and particular flavour – still very lemony and aromatic, for sure, but also slightly fermenty, quite salty, less acidic and more rounded.

Meyer lemons are a particular variety, probably a cross between a lemon and a mandarin or orange.  They have thinner skins, which are usually a deeper yellow in colour, and are a little smaller than regular lemons.  Their juice and zest is considerably sweeter, fruitier and herbier, making them highly desirable to pastry cooks and cocktail mixologists, especially in the Bay Area of California it seems, where Alice Waters’ restaurant, Chez Panisse, helped popularise them.  Being harder (ie less profitable) to grow commercially, cooks usually have to source them from friends’ and neighbours’ gardens, if they’re lucky enough to live in a warm enough climate.

As we all know, lemons, like their many citrus cousins, are an excellent source of vitamin C.  Vitamin C was not identified as ascorbic acid until the 1930s, although its benefits had already been established.  Sea-faring captains of the 15th – 17th century seemed to have appreciated the benefits of feeding their crews with regular doses of citrus fruit or juice.  Then for some reason the wisdom was lost, and many poor sailors of the 18th century lost their lives in the most hideous way to scurvy, which sets in after 3 months of no vitamin C intake.  For example, George Anson set out to circumnavigate the world in 1740.  Four years later he returned with less than 10% of his original crew of 2,000, the rest having died, mostly from scurvy.  It wasn’t until 1795 that British seamen started getting a regular dose of lime juice, which earned them abroad the derisive name ‘limeys’.

Lemons have an array of other practical uses, for example: