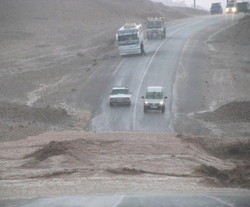 By the time we’d got over the highest part of the High Atlas, it had started to rain.  As we came down through the plains towards Marrakesh, we noticed some of the little streams were starting to overflow, and fields starting to look really quite damp.  Then we came round a corner and realised we weren’t going any further – rivers here can overrun bridges at a moment’s notice.  Sadly, after turning round, we realised we weren’t going back either: the little overflowing streams of ten minutes ago had now become rivers overrunning bridges too.  We could sit and wait, or take the advice of the strangely animated man standing out in the rain, and take the little unmarked road out into the middle of nowhere … 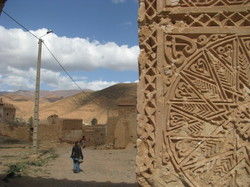 We were trying to get to Marrakesh to stay with a Moroccan family: Jean-jacques Gérard had arranged for us to stay with his in-laws, and we were excited to see what real Moroccan home cooking was like.  They say that the best food here is in people’s homes, and we’d started to suspect that there was something in this.  We’d realised that lots of the interesting stuff is done by women: this means it’s usually done at home – so you don’t come across it on the standard tourist trail.

For example, finding the women who know how to make couscous the old-fashioned way, rolling it by hand, had taken us quite a while (although we managed it in the end).  Our new mission was to find the women who make warka …

Remarkably, the little road did actually lead to Marrakesh, and without going through any major floods.  It was a different matter once we got into the city, with streets under feet of water – finally, a justification for having that snorkel put on the car!

But first we rested up for a couple of days at Le Bled, an organic farm on the edge of town, where we were lucky enough to catch the olive harvest and learn all about their excellent fruits, vegetables and above all, herbs (they know a thing or two about mint here), from the amazingly enthusiastic and knowledgeable Ibrahim.

Then, suitably prepared for the legendary hassle and graft of Marrakesh itself, we got a taxi into town to meet Afida and her family – and cunningly left my mobile phone in it.  Finding a lost phone in Marrakesh might seem an impossible task, especially when the taxi company deny all knowledge of it – but Afida’s son Abdeljabar was not one to give up that easily.

Some detective work to find the numbers that it had been used to call (all, mysteriously, single young girls), some calls to get some names from them … gradually the net closed in, and suddenly the phone was magically found and brought round – by the very same taxi driver.  And after this auspicious start, they looked after us like part of the family, taking us to the local hammam, getting Anna’s limbs decorated with henna, and taking us to the best harira in the Djemaa El Fna. 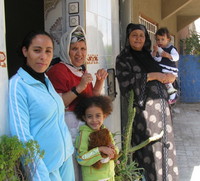 And then the home cooking: Afida showed us her hard-nosed bargaining in the local souk, and together with Saïda showed us how to cook an enormous range of things and fed us incredibly well.  There’s too much to list here, but three things have to be mentioned: the tea, with endless combinations of delicious fresh herbs (not just the various kinds of mint, but sage, absinthe, verbena …); the muffins, freshly backed mtlor dipped in olive oil; and the cardoon tagine, bursting with interesting flavours, olives, and preserved lemons.  We had, as promised, come across a seriously large number of various tagines in Morocco, but this definitely beat the lot.  Thank you so much to the whole family – we learnt a lot, and hope and trust we’ll meet again. 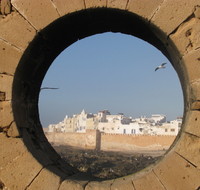 And – we had our first real trid.  We’d heard about trid when reading Maggie’s cookbooks back in Tangier – Robert Carrier has a theory that it’s related to ciceri e tria, which we’d got quite excited by in Puglia.  And we’d had a delicious but clearly poncified version of it at the restaurant supplied by Le Bled, Dar Moha (which was definitely the best restaurant food we had in Morocco).  But Saïda’s was the real thing, and we could see the relation to ciceri e tria – with fried dough, slow-cooked pulses, and savoury sauce, it’s filling, satisfying, pancakey and generally yummy.

Eventually we had to leave, and headed for the coast to Essaouira where we were to meet Feli, the owner of the organic Lalla Mira hotel, restaurant, hammam and (coming soon …) vegetable farm.

We could have stayed here for weeks – not only is Essaouira beautiful (and full of fresh fish stalls), but Feli is full of information, full of passion for good food and ingredients, and knows exactly who to talk to and where to go.  First she let us spend some time in the restaurant kitchen, where Touria taught us how to make an excellent, moist and meaty bstila, and Anna taught her how to make Chez Panisse‘s jerusalem artichoke soup and Madhur Jaffrey’s cauliflower bhaji in return.

Of course, it hadn’t escaped our notice that making bstila requires the legendary (and yet remarkably everyday) warka, a super-thin pastry (a bit like yufka and filo but different).

They don’t make it themselves at Lalla Mira – they get it from Khadija who makes it at her home down the alleyway.  And this is where we finally found it, spending a morning watching open-mouthed as Khadija cheated death (or at least, very hot fingers) to turn handfuls of sloppy dough into light, leafy warka in seconds.  Barnaby was very impressed. 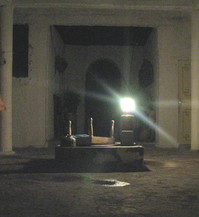 But there was much more to come.  We spent an evening cooking chicken tagines and listening to powerful Hadarat trance music at renowned local artist Graguia Benhila’s house in the countryside (or at least, Anna did;

I had to sit outside – no men allowed) while being taught how to make absinthe tea by her son Ahmed.  And more muffins, in fact – mtlor cooked over a proper wood fire.

There are a lot of so-called “women’s co-operatives” in this part of the country, many of which are neither particularly co-operative, nor actually owned by women.

But thanks to Feli’s excellent local knowledge, we got to visit some genuine ones, and learnt lots about herb farming and argan oil.  More about this later, but here’s two quick tips: don’t believe the story about the goat poo (occasionally, the goats really do climb the trees and eat the argan fruits, but the nuts come out unscathed the same end they went in); and if you get a chance to try amlou (the delicious paste made of ground almonds and argan oil), do.  It’s very good on muffins, for example. 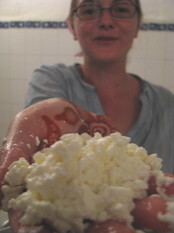 As is cheddar.  We’ve had a lot of cheese-making adventures on our trip (in Italy, Greece, Poland and France, for example) but we hadn’t expected Morocco to bring more – and certainly not in the form of this most English of cheeses.  But then Abderrazzak Khoubbane is not a man who lets himself be dictated to by tradition (or, we suspect, by much else). 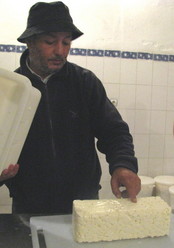 After a career in Canadian academia, he has returned to Morocco where, with his brother Abdellah, he is turning the ancestral family kasbah into what will be a very special guesthouse, and has established what must be the country’s finest cheese-making business (they hope soon to be the first in the world to make cheese from cow’s, sheep’s, goat’s and camel’s milk!).  Anyway, Feli had told him we wanted to learn how to make cheese – and learn how to make cheese we did.  By the time midnight came around, we had made enough cottage cheese to keep the Lalla Mira restaurant going for some time, and a large brick of proper cheddar.  Thank you to both brothers for all the information, advice, and the only genuinely hands-on cheese tutorial we’ve had all year!

We finally dragged ourselves away from Essaouira and headed up the Souss valley to Taliouine.  We were looking for saffron, and we certainly found it – this was the middle of the harvest season, and the villages up in the mountain passes are full of people picking the brightly coloured flowers.

At least, they are if you get up at dawn.  Driss and Mohammed showed us the fields, explained the facts to us – and made us delicious saffron tea.

And when we had a spare afternoon, we went for a walk in a nearby river valley, which will be one of our favourite memories of Morocco, and how generous and hospitable the people can be.  Walking at random through olive trees, we met people at work irrigating their fields – would we like to share their tea?  Have some bread?  Some bisara soup (with excellent chillies)?

And in the village on the other side of the river, we met Hanan outside her house.  We had to come in for tea.  And several kinds of bread.  The rest of the family came round too, of course, and most of the neighbourhood children.

And despite not sharing much in the way of language (she knew as much English as we did Tashelhiyt – we got by with lots of basic Arabic and advanced mime) she showed us her ovens, her corn store, how she made flatbread and butter – and then even sent us home with a jar of smen.  Thank you so much, and I hope we get to meet again one day.

After such a high point, we had to move on to avoid anticlimax – yes, not even the Taliouine Saffron Festival could tempt us to stay.  A day’s drive over the Anti Atlas, getting drier and craggier all the while, and we found ourselves dropping down to Mirleft, and the start of the desert …

You can see some of our photos from Morocco here (from Magdaz to Marrakech) and here (from Essaouira to Taliouine).