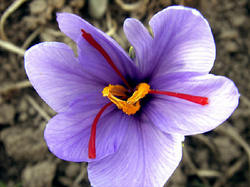 ‘Saffron’ comes from the Arabic ‘az-za’fran’, which in stems from a Semitic root meaning ‘to be/become yellow’.  Via the mediaeval Latin – ‘safranum’ –  the name spread to almost all European languages and many non European ones also.  The word is recognisable in Hindi, Amharic, Finnish, Japanese, Hebrew and even Basque, to name but a few.

Saffron is the dried stigma of a particular autumn flowering crocus, which was probably first cultivated in the Bronze Age in or near Greece.

The crocus was selectively bred for its long red stigma, of which there are three in each flower, to the point where it cannot naturally reproduce and spread without the help of human hands.  From Greece its cultivation spread eastwards to Persia and on to China, and also westwards through Europe and to America.

It has long been prized for its unique properties – a potent ability to colour foods, paints and other materials bright yellow, an unusual bitter, earthy taste and a bizarre straw-like aroma.  The colour is mainly due to crocin, a powerful carotenoid pigment; the flavour to picrocrotin, which probably evolved as a defence against predators; and the smell to the volatile safranal, which is released only once the stigma have been dried.

It seems there is nothing saffron has not been used for – paint, food colouring, spice, perfume, cosmetics, magic potions, divine offerings and the treatment of some 90 illnesses.  Cleopatra and Alexander the Great both bathed in it – she to make sex more pleasurable; he to cure battle wounds.

So valued has it been that people have given their lives for it on a number of occasions.  During the 14th century the Black Death in Europe caused demand to skyrocket, with saffron being imported by the shipload from Mediterranean islands such as Rhodes.  One such shipload, worth $500,000 in today’s money, was stolen by a group of nobleman, and the ensuing bout of saffron piracy lead to the 14 week ‘Saffron War’ and the establishment of Basel as a safer, closer saffron producing centre.  (Saffron crocuses are still grown in the Swiss mountains.)  Later the European production and trade centre moved to Nuremberg, where rampant adulteration of saffron lead to the Safranschou code, under which adulterers could be fined, imprisoned or even put to death.

It is indeed very valuable – the most expensive spice you can buy.  Not only does the crocus require very specific cultivation conditions, but it can also only be harvested and processed by hand.  Each flower is open for just a few short hours, when it must be hand-picked.  The stigma are then separated out by hand, and dried in the sun or over a fire.  It would take you 200 hours of back-breaking labour to harvest enough crocuses (some 70,000) to yield 450g (1 lb) of saffron, for which you could then charge between $500 and $5000.

The world’s largest producer, by far, is Iran, followed by Spain, with some also coming from India, Greece, Azerbaijan, Morocco, and Italy.  Production decreased in other European countries after the introduction of new exotic temptations such as coffee, tea, chocolate and vanilla.  England used to produce a fair bit, with Saffron Walden in Essex being a major centre.

It is thought that the British hot cross bun used to contain saffron.  They are traceable to the saffron crescent cakes made by the Phoenicians as offerings to Ashtoreth, goddess of fertility, from whose rites Easter was later developed by the Christians.  Ashtoreth is worth getting to know.  She has been widely worshipped for millennia, as Astarte by the ancient Egyptians, Aphrodite by the Greeks and of course Venus by the Romans, among other incarnations.

Saffron may be expensive but a little goes a long way, so it’s worth it.  Good saffron will look bright orange-red, feel fresh and smell great.  (Hence the deceptive red cellophane around saffron in those little supermarket jars.)  The best is ‘sargo’ from Iran, followed by Spanish ‘coupe’, both of which can be hard to find.  In which case you can confidently settle for ‘pushal’ from La Mancha in Spain.  Look out too for the array of ‘boutique’ saffrons now available from various random places, organic and all.  If it seems too good to be true, it probably is.  Watch out for safflower masquerading as saffron, saffron threads mixed with the tasteless yellow crocus stamens or even red silk threads, or saffron powder cut with turmeric or paprika.

If stored somewhere cool, dark and airtight saffron will keep pretty well for months if not years, but don’t buy in bulk as it does lose some of its flavour with time.  Some people recommend keeping it in the freezer, but I don’t.

Most recipes annoyingly call for ‘a pinch’.  The only way to work out how much you need is by developing a feel for it.  A little does indeed go a long way, but don’t use so little you end up not noticing it in the final dish.  Then your pinch was only wasted.  Unless the dish is already hot and liquidy, such as a braise or risotto, you should first crumble the threads and let them steep in a little hot, but not boiling, water (or stock, wine, milk etc) for 10-20 mins.  Some people say it’s also worth toasting the threads lightly first; others say this is a waste of time.  Adding a little alcohol or oil to the steeping liquid is a good idea as not all of saffron’s carotenoids are water-soluble.

Not that you would, but don’t eat saffron in large quantities, as that can be poisonous.  Also, please don’t try to pick your own – there is a very similar-looking crocus out there that is responsible for a number of DIY saffron-makers’ deaths.  Safer to stick to the little red cellophane packets.

Our culinary bear, Barnaby, found saffron growing in the Atlas mountains of Morocco.